New York — Just like her first time, Madonna made jaws drop and cheeks blush at the 20th annual MTV Video Music Awards -- only she had help Thursday night from the latest generation of video divas, Britney Spears and Christina Aguilera.

Proving they've come a long way from their Mouseketeer days, the young pop tarts gave a gyrating, writhing tribute to Madonna to open the show. Dressed in the same kind of white bustier wedding dress Madonna wore while performing "Like a Virgin" during MTV's inaugural awards broadcast in 1984, Spears and Aguilera sang a cover of the not-so-innocent tune.

Then, while Madonna sang her new "Hollywood" in a masculine all-black outfit, she shared an open-mouthed kiss with both Aguilera and Spears.

It was all in a night's work for MTV's annual extravaganza, where mere music takes a back seat to wacky antics, barely there outfits and eye-popping performances.

There were no big winners -- Missy Elliott's "Work It" won two awards, including video of the year, while Justin Timberlake, Coldplay and Beyonce had three apiece. The 71-year-old Johnny Cash, nominated seven times for "Hurt," won once.

Besides Madonna, Spears and Aguilera's bump-and-grind number, there was 50 Cent's pimp-a-licous performance of "P.I.M.P.," during which he was joined onstage Snoop Dogg, the ubiquitous former pimp Bishop Don Magic Juan, members of his G-Unit posse -- and a bevy of half-naked women.

"Today is the anniversary of Martin Luther King's 'I Have a Dream' speech -- isn't it nice to see that his dream has finally come true?" cracked host Chris Rock after 50 and company left the stage.

Nominated for seven awards was Justin Timberlake's "Cry Me a River" video, which takes a not-so-subtle dig at ex-girlfriend Spears; the video features Timberlake exacting revenge on a cheating Spears look-alike.

"This is a travesty! I demand a recount," he said, before paying tribute to Cash.

"My grandfather raised me on Johnny Cash," Timberlake said, "and I think he deserves this more than any of us in here tonight."

Although Cash had hoped to attend, he was hospitalized with a stomach ailment.

Video of the Year: "Work It," Missy Elliott 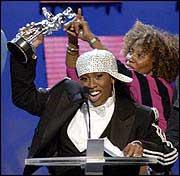 Video from a Film: "Lose Yourself," Eminem

Special Effects: "Go With the Flow," Queens of the Stoneage

Art Direction: "There, There," Radiohead