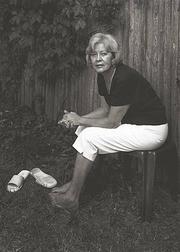 Karen Swisher, president of Haskell Indian Nations University, is featured in the recently published "Real Indians." The book works to break down stereotypes of American Indians by picturing them in ordinary situations and giving them a forum to write about themselves. Proceeds from the book benefit The American Indian College Fund.

Or perhaps more like the bare-chested savages scalping white settlers in 1990's "Dances with Wolves."

Swisher, a Standing Rock Sioux, is president of Haskell Indian Nations University. She has a doctorate degree. She likes to work in her yard. She drives an old-school cherry red Volkswagen Beetle convertible during the summer. And she doesn't like to be in the spotlight.

But she's proud to be featured in "Real Indians," a new book dedicated to those who have built America's tribal colleges.

"I like the idea of showing the other side of people, showing them in a different venue than the work and career that many of us have come to know each other," she says. "But more than that, I like the idea that the book is going to dispel or put a different light on some of the stereotypes people have about American Indians and Alaska Natives in this country."

Swisher has been involved in tribal education most of her life. She has taught at Arizona State University, the University of Utah and Huron College in South Dakota. She came to Haskell in 1996 to direct its teacher training program and became university president in 2001.

She's seen enormous changes in the tribal education movement during her lifetime.

Progress
"Real Indians," published by The American Indian College Fund, opens with portraits of 37 American Indians who are making strides in tribal education. Photographs of Indian administrators, teachers, students and graduates stand alongside first-person narratives. Then the book reminds readers how far the movement has come.

Early on, Indian children were herded into a so-called "Indian education" system that amounted to forcible assimilation. Children were sent to faraway boarding schools, where their hair was cut short and they were forbidden to speak their language or practice their native religions.

An exhibit at the Haskell Cultural Center and Museum attests to that. It describes the harsh conditions for students at what opened in 1884 as a boarding school for American Indians. A padlock used to confine children who ran away or slipped back into their native tongues is on display.

But the 1960s saw the opening of the first tribal colleges in the country. In 1993, Haskell went from a junior college to a four-year university with an average enrollment of 950 students from 152 indigenous nations. It's one of 32 tribal colleges in 12 states.

The idea, Swisher says, is to create an environment in which Indian students feel comfortable learning to excel in the contemporary world while still honoring their native cultures.

"Real Indians," a collection of photographs and essays about American Indians involved in tribal education, is available for $50 at www.collegefund.org, the Web site of The American Indian College Fund. Proceeds benefit the fund, which helps support students at Haskell Indian Nations University.For more information about the fund or to make a contribution, go to the Web site or call (800) 776-3863.

"It's been described, instead of saying 'living in two worlds' that we live in one world with multiple loyalties. And I like that," she says. "You can look at different aspects of your background and be proud of whatever it is. Many people are mixed bloods. I am. My mother was Norwegian. I'm very proud of that, but culturally, I was raised in my father's culture, and that was reservation-based and American Indian.

Dreaming with scholars
American Indian writer Sherman Alexie, author of "Smoke Signals," wrote the introduction to "Real Indians." In his characteristically satirical style, he lauds the book's educated "indigenous nerds" and wonders "What are we supposed to do with shorthaired Indians?"

He points out the details in the photographs, taken by Colorado photographer Andrea Modica, that "contradict everything you thought you knew about Indians": boxing gloves, baseball hats, comfortable European shoes, basketballs and hoops, mountain bikes, videotapes and barbecue cookers.

"Look at all of these Native-Americans successfully living on both sides of the hyphen!" he writes.

Juan Perez and his Daughter, Olivia

Although Alexie seems to be directing his comments toward nonnative readers, even Swisher discovered surprises in the book.

"Not so much about sense of purpose, but just the diversity among us, just the interests that people have," she says. "I find myself devoting WAY too much time to working, and as I read, I thought, 'You know, so many of my peers have really interesting things that they're doing outside of work.' My life seems pretty dull compared to theirs."

The biggest challenge facing tribal colleges today, Swisher says, is finding stable funding. Haskell is funded by the U.S. Bureau of Indian Affairs. It also gets about $100,000 a year from The American Indian College Fund, says Reta Beaver, financial aid director at Haskell. That money goes directly to students.

And the students are what keep Swisher, who in her late 50s is nearing the end of her career, happily coming back to campus each day.

"One of the greatest rewards is to be able to interact with all of these potential scholars and listen to them dream, think about what they can do with their education, what they WANT to do," she says. "It's fun to see them having fun in an environment where they feel secure and safe.

"It doesn't take long to really love Haskell, and many of our students love being here."