Arnold's past may turn off women voters

You don't have to be one of those Californians who believes the road to recall ran through a looking glass to feel as if the current campaign just gets curiouser and curiouser.

Take, for example, Arnold Schwarzenegger's disturbing 26-year-old interview with a now defunct skin magazine and the problems it poses not only for his gubernatorial campaign, but also for the mainstream media organizations covering it.

The five-page exchange occurred in 1977 and appeared in a mercifully forgotten magazine called Oui, which Playboy had rolled out as a kind of raunchier younger brother to its flagship publication. Schwarzenegger, who was 29 at the time, was promoting "Pumping Iron," the documentary film that launched his movie career. In an extended taped conversation with freelance writer Peter Manso, he employed a virtually endless stream of lewd and vulgar expressions to describe his attitudes toward women and sex, his intimate physiology -- in graphic detail -- and a number of specific sexual experiences.

One of the latter took place at Gold's Gym in Los Angeles. According to Schwarzenegger, "a black girl" entered the room "naked" and "everybody jumped on her and took her upstairs where we all got together." In another instance, Schwarzenegger recounted an anonymous sexual encounter backstage at a bodybuilding competition that left him feeling "like King Kong."

"Having chicks around is the kind of thing that breaks up the intense training," Schwarzenegger told Manso. "It gives you relief and then afterward you go back to the serious stuff."

Elsewhere in the interview he said he used marijuana and hashish and that he had no "hang-ups" about homosexuals, whom he nonetheless described with a vulgar epithet.

Taken as a whole, the interview is so thoroughly lewd, vulgar and offensive that no matter how interesting or relevant to their decision voters may believe it to be, they are not likely to read extended -- or even forthrightly representative -- quotations in this or any other mainstream newspaper. 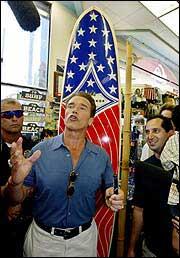 Republican candidate for California governor Arnold Schwarzenegger speaks after autographing a surf board during a visit to a Jack's Surf Shop in Huntington Beach, Calif. Schwarzenegger's comments about women -- in a 1977 interview and elsewhere -- may alienate female voters.

It's hard to imagine any other American political candidacy surviving such comments, no matter when they were made. But Schwarzenegger's is unlike any other candidacy -- not least because of the way it is being covered. In this instance, the relevant hang-ups are not Arnold's but the media's.

First off, there's the well-founded reluctance to affront readers with vulgar language and lewd sentiments, even when they are spoken by a public person. And make no mistake, Schwarzenegger, the budding celebrity on the make, was as much a public figure when he gave the interview as he is now that he is running for governor.

Second, the frenzy surrounding former President Clinton's infidelities left many reporters and editors deeply ambivalent about appearing to rummage around in public figures' private sex lives. Call it impeachment hangover. Of course, it was Schwarzenegger who willingly gave up his privacy in the hope of gaining greater celebrity. Clinton, by contrast, was willing to lie to maintain his sexual privacy. But that distinction may not be enough to overcome the inhibitions of journalists who remain unsettled by the excesses of the Clinton years.

As one prominent Republican political consultant, who asked not to be identified, put it: "You have mainly male editors deciding this was a single guy screwing around 25 years ago, but that's not the issue. This is a guy boasting -- very explicitly -- and indicating particular attitudes about women. His sexual acts were private until he chose to publicize them --and with obvious relish and bravado. If I were an editor, I would have no trouble publishing this interview as news. I would have trouble publishing a bunch of old girlfriends talking about Arnold or doing stories on his active sex life from years ago. But from a journalistic standpoint, it is silly to equate his published views with his private sex life."

As a point of reference, it is worth recalling that even during Clinton's senatorial trial, The Times Poll found that 52 percent of women voters maintained a favorable impression of the impeached president.