My dad and I have been fishing together since I was too small to reel in my own fish. A few weeks ago, we realized a decades-old dream: to fish on Alaska's Kenai River.

Just to be in the surroundings was too much to process. We saw bears, moose, caribou, eagles and otters. Giant salmon swam against the current in their yearly passage to spawning grounds upriver. And chalky blue water reflected Alaska's high mountain peaks.

We spent a week on the Kenai river during the salmon runs in early August. We caught every species of salmon found in the river, including a 65-pound King salmon, and the largest rainbow trout either of us had ever seen. 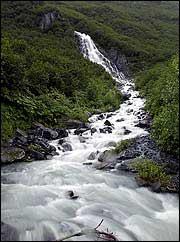 A waterfall dumps newly melted snow into a river near Valdez, Alaska. Waterfalls abound in the area due to heavy snowfalls during the winter.

The trip was one of the best times I've ever had, and I was glad I got to enjoy it with my dad. Not only did he teach me to fish, but, as a former nature photographer, he also taught me photography at a young age.

To fish in those surroundings and spend that time together will always be a favorite memory. I can't wait to go back.

A float plane soars in front of mountain peaks on the west side of Cook Inlet in Alaska. The west side of the inlet is uninhabited and inaccesible by car. Dozens of daily flights bring anglers and their guides to the area for daylong fishing trips. The planes unload their passengers on floating mats of entangled reeds that grow in the area. Guides leave small boats at the natural docks and embark to find salmon for their clients.

A pair of black bears looks for salmon carcasses at the mouth of a creek. Bears or traces of bears can be found just about anywhere salmon can be found. The runs of salmon make up the biggest part of a bear's diet during the summer months, when they're fattening up for winter hibernation.

A boy jumps away from a recently caught silver salmon at the city docks in Valdez, Alaska. Monthlong fishing derbies bring thousands of anglers to different Alaska towns, lured by cash prizes for the largest fish, including $50,000 for a tagged salmon released by promoters. 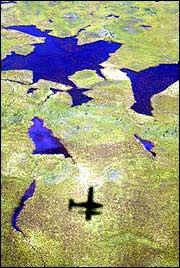 Our float plane casts a shadow on the marshes below as we travel across Cook Inlet for a fishing trip.

Fog and clouds shroud the coast of Valdez harbor. The area receives more than its share of precipitation and holds the state's record for snowfall in a 24-hour period: 66 inches.