Commission to stay silent on tribute to '60s beat icon

A proposal to name part of a Kansas River tributary after the late William Burroughs drew spirited debate Monday on the Douglas County Commission. However, the commission decided against making a formal recommendation on the plan. Burroughs, who died in 1997, is pictured here at his home near the creek. (For photo use info, call 832-6351)

When it comes to naming a creek after beat-generation icon William Burroughs, Douglas County commissioners have a lot of opinions about having no opinion.

Monday morning, commissioners failed to reach a decisive conclusion about whether to support efforts to name the creek after Burroughs.

The unnamed creek -- known informally as the Atchison Topeka and Santa Fe Tributary -- cuts through east Lawrence and past 1927 Learnard Ave., where "The Naked Lunch" author Burroughs lived the last 15 years of his life.

The Lawrence City Commission has voted to support the Brook Creek Neighborhood Assn.'s push to honor Burroughs by renaming the 2.6-mile tributary of the Kansas River. The 15-member U.S. Board on Geographic Names is expected to rule on the application this spring, after accepting input from other interested parties.

County commissioners won't be adding to the discussion.

After a discussion that seemed more like a college literature class than a commission deliberation, the elected officials said they would not forward a formal recommendation at all. 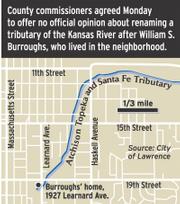 Much like students struggling to interpret Burroughs' disjointed and controversial works, commissioners couldn't decide what to decide, other than to side with indecision.

"If we simply don't take a position, then it's not a recommendation either way," said Bob Johnson, commission chairman. "I'm going to be silent."

Not that there wasn't plenty to talk about.

Commissioner Jere McElhaney decried the onetime Lawrence resident as a heroin-addicted, wife-shooting keeper of a "revolutionary lifestyle" whose memory ought not be celebrated.

"This sends the wrong message, that we can name a creek or a landmark after a person who was a known and habitual drug user and promoted the use of drugs, and promoted a revolutionary lifestyle and who promoted anarchy and had no respect," McElhaney said. "You know, he might have been great, supposedly, in his little world, but ... this type of gentleman, I mean, not one of us would want our children or grandchildren to follow that type of lifestyle."

Commissioner Charles Jones countered that Burroughs was a creative visionary whose personal misdeeds shouldn't disqualify his name from gracing the creek through the town he called home.

"If I had children or grandchildren, I would want them to read his books because his books were creative and challenging and made you think," Jones told McElhaney. "Ultimately, I think he was a very creative force in the world."

Besides, Jones said, who among the inspirational giants didn't have a few problems in their life?

"Robert Frost was cruel to his family," Jones said. "Ronald Reagan was remote to his children. There are a lot of people you could look at and say there's some negative aspects. And if that's the standard we use, I don't know who we celebrate."

Comments about the city of Lawrence's application to name an unnamed creek through east Lawrence as Burroughs Creek may be sent to the U.S. Board of Geographic Names. The board is expected to make its ruling this spring.

McElhaney responded by referring to a "William Tell" game gone wrong in the 1950s, when Burroughs was in Mexico: "Anybody who would put an apple on the top of his wife's head and try to shoot it off and accidentally -- supposedly -- kills his wife at it ... yeah, we're really doing a good job in this community if the city wants to pass this," McElhaney said, sipping his coffee with a pinch of disgusted sarcasm. "Yeah, we're sending a good message for our kids."

Because Johnson chose not to break the stalemate, the U.S. Board on Geographic Names won't be getting the recommendation it requested.

The Brook Creek Neighborhood Assn. took the idea to the city's Parks and Recreation Advisory Board in May, noting Burroughs' prominence and his ties to the creek.

"It flows right by his house," Michael Almon, a neighborhood resident who came up with the idea, said at the time. "He was the most famous person along (the creek). We just wanted to honor him, I guess."

City commissioners unanimously endorsed the idea, forwarding it to the geographic board for consideration.

The geographic board, which is part of the U.S. Geological Survey, typically relies on the thoughts of governments and other interested parties before deciding whether to change the name of the more than 2 million creeks, rivers, swamps, mountains, meadows and other natural features whose names it regulates.

Roger Payne, the geographic board's executive secretary, said naming natural features after a person was "strongly discouraged." The only exception: if a person had a specific connection to a particular feature, or in some way offered a "high degree" of civic contribution or otherwise was notable in some way.

"I think this person meets that requirement," Payne said.

Payne said geographic board members would review all relevant materials and comments before deciding whether to name the creek Burroughs Creek. A ruling is expected sometime between February and April.

"We will present information to the board that is unambiguous," Payne said. "Naming a feature for someone is a great honor, and one we don't take lightly."