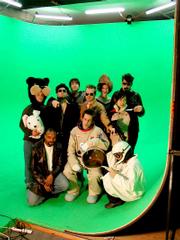 "Well I rock mad rhymes and I eat mad crumpets / And when I hear the bass well you know I've got to pump it / Fish and chips and Guinness for flavour / I rock the U.K. in my mad Chuck Taylour's"

"The best part about that was they showed it right after the quiet remembrance of Jam Master Jay," says Timmy Fisher, one MK12's five founding members. "It was this solemn moment and then suddenly you had this white British kid rapping about crumpets."

As the MK12 designers have discovered, creating high-quality animations is only half the battle in building a successful motion graphics company. From losing its first two big gigs in the wake of Sept. 11 to finally earning a steady flow of big-name clients, MK12 has endured ups and downs with a little bit of gold dust and plenty of 80-hour work weeks.

"We've really busted our asses to get here," says graphics and sound designer Shaun Hamontree, who like the rest of team often works through the night, weekend, and meals. 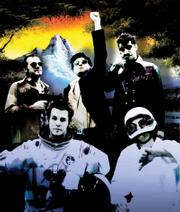 "People are like, 'You guys got so lucky, you got to be your own bosses,' and I'm like, 'Fuck you, man! You have no idea how shortened our life expectancies are because of that first year!'"

Diamond in the rough
Walking into MK12's workspace is something like walking into a high-tech storeroom of has-been pop culture. Arcade games, vintage board games, old magazines and assorted secondhand props line the edges of the finished warehouse space. Everywhere is evidence of on-end hours spent at work: a sleeping loft, countless forsaken paper cups, oft used ashtrays within reach of most every chair. This all makes for a stark contrast to the otherwise pristine environment lined out with 15 souped-up Macs, plasma screens, fully-loaded sound studio, and other high-tech gear. Unshaven, chain-smoking designers quietly chug coffee and plug away at their hexagon-shaped desks, interrupted only by the chirps of a cheery pair of finches.

Members of MK12 say they frequent garage sales and thrift stores for props and inspirations. One recent set of videos for an online graphic design publication called "Design is Kinky" was animated entirely out of garage sale dolls and furniture. Another piece, "Ultra Love Ninja," spawned from some cheaply printed books designer Jed Carter brought back from Guatemala. (As Fisher tells it "One was how to be a ninja. The other book was dream interpretation, which had various illustrations of this woman in a nightie, having disturbing dreams. From that, we decided the ninja, in the 'burbs, should try and get a date.")

"We're like dumpster-diver designers," Hamontree says. "Everything here has a possibility."

"You go into most of these places and they're really antiseptic," McGraw says. "MK12 welcomes messiness into their studio, and I think it really aids their creative process."

Since the company began in June of 2000, MK12 has earned the attention (and dollars) of top-notch corporate clients like Adidas, Levi's and Best Buy and networks like ESPN, MTV, Comedy Central and The Cartoon Network. They've also done music videos for The Faint and Hot Hot Heat.

According to producer Alex Dervin, who manages MK12 from his L.A. office, the group thrives because its members design for themselves as opposed to following industry trends.

"They're created a bubble for themselves where they're able to do their own work without being subject to whatever might be cool in New York or L.A.," Dervin says. "I don't think they could exist anywhere else."

Ironically, Kansas City might be MK12's least lucrative market. The bulk of the company's work goes to clients in New York, San Francisco and Los Angeles, and as far away as Italy (Diesel Jeans) and Japan (AXN Network).

"It's extraordinarily unique that you have this kind of studio in Kansas City," McGraw says. "Most of the other recognized design outfits are getting recognition from in-town clients ... whereas they've not only gotten the attention of the underground community but also attracted international clients."

He adds: "At the end of the day, after they've received all the attention, it's kind of a pretty amazing joke that it's just these art school fuck-ups doing this amazing work."

Smoke and ramen noodles
MK12 coalesced in early 2000, when four Kansas City Art Institute graduates - Timmy Fisher, Matt Fraction, Ben Radatz and Jed Carter -- lost their jobs at a KC web company that went belly-up in the dot-com bust. With healthy severance checks and all the equipment they could carry out, the foursome pooled their resources and started MK12 in a midtown-KC apartment.

"There were six foot ceilings and all of us were chain smokers," Fraction recalls. "Nobody could see, nobody could breathe ... It was horrifying."

The first few months of business were slow, forcing the four members to make due with miniscule paychecks (if any) and eat a lot of peanut butter and ramen noodles. Without steady client work, MK12 kept busy creating short animated films and entering them in festivals to get the company's name out.

Still from the video MK12 produced for The Faint. More work by the K.C. design studio is on their website, mk12.com.

"There was a weird paradox because there was the joy of being our own boss and lots of creative freedom, but then there was the downfall that we had to eat our own shit for protein," says Hamontree, who joined the company a couple months after it was founded.

After half a year of living hand to mouth, MK12 caught its first big break. Within an hour one morning, the company received faxes from two major networks. The networks -- Cartoon Network and ESPN -- wanted to know whether MK12 would be interested in doing work for Dexter's Laboratory and The X-Games, respectively.

With much relief, MK12 agreed to make pitches for both jobs. 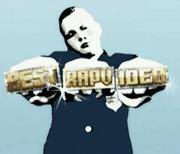 Still from the MTV 'Best Rap Video' intro produced by MK12. More work by the K.C. design studio is on their website, mk12.com.

"We literally had a meeting the week before we got the X-Games and Dexter offers where we were like, 'Oh shit, we have $500 between us and the phone isn't ringing,'" Fraction said. "We sort of sat looking at these two pages going, 'OK, we've finally turned the corner; we're going to be able to stay in business.'"

Dexter gets dumped
Ironically, the two gigs that saved the MK12 team from dissolution never made it to TV.

The company made a pitch for the X-Games package but lost the job to a rival animation studio. Even so, MK12 took home a hefty paycheck.

"Thirty percent of our income comes from jobs we never get," Fraction estimates.

The Dexter's Laboratory material -- which consisted of short skits and promos for the "Dexter Goes Global" week -- seemed to be impressing everyone involved until the Sept. 11 attacks suddenly made the subject matter seem impropriate.

"It was all Dexter taking over the world with these armies of little Dexters and it had all these black arrows shooting out of a nation with a big D on it," Fraction remembers. "We sort of pitched it as 'Triumph of the Will' for kids."

Still from the Xgames segments MK12 produced. More work by the K.C. design studio is on their website, mk12.com.

Though Comedy Central only used a fraction of the five-plus minutes of footage, MK12 still got paid for the full amount of its work.

The company wasn't so lucky, however, in the case of another big job it was in line to get. The "Truth" anti-smoking campaign had all but hired MK12 to do treatments on a series of commercials that featured piles of body bags outside of big tobacco corporations on New York City streets. Predictably, the spots were shelved immediately after 9/11.

"It was our first real giant job and suddenly it went away," Fraction says. "It wasn't until December that we got another gig."

Not a secret now
Though bigger paychecks are no longer so few nor far-between, MK12 -- which currently payrolls nine fulltime employees and is debt-free -- says it takes only work it enjoys, regardless of the client's budget.

"We do a lot of professional work to pay the bills and keep the doors open but our real love lies in doing our own work," Radatz says. "One feeds the other."

One such low-budget project was a music video for Omaha-based synth-rock band The Faint. The video for "Agenda Suicide" -- which told the story of a businessman crippled by the pressures of everyday life -- became so popular online that MK12 had to take it off its Website because the flood of downloading crippled its servers.

Among those impressed with The Faint video was Canadian band Hot Hot Heat, which asked MK12 to produce its video for "No, Not Now."

"We were like, 'Wow, this is great, we've been stealing your music for a long time; we'd like to give something back,'" Fraction says.

The band spent a day performing in MK12's giant bowl-like green screen and gave the animators complete artistic freedom to finish the project. The resulting video seamlessly places the band into a virtual theme park with a comic-like narrative about a sexy vinyl-clad villainess eluding an army of rabbit-costumed goons.

The video premiered Aug. 25 on MTV.com. Even if it had made it to MTV or MTV2, it's unlikely that its creators would have been able to see it.

"The sad irony of it is that none of us have cable so we rarely get to watch our stuff when it actually airs," Fisher explains.

To Spain and beyond
Though many of the MK12 designers have had offers to take bigger paychecks at other animation studios, no full-time employee has ever left the company.

"We get headhunters that call up and try to steal us all away," Fraction says. "I'm just like, 'Hello? No, I'm pretty happy here. I own a big chunk; it's great.'"

In January, the MK12 team will travel to Spain to lecture at a design symposium at the Guggenheim Museum in Bilbao.

Fisher said he felt honored -- and a little surprised -- to receive the invitation.

"We always try to push ourselves to be artists first so it's nice to get that feedback outside of the broadcast industry," he says.

Members of the group will also travel to speak in Australia and has returned to the Kansas City Art Institute as guest lecturers. Fraction says one thing graduating design students should be wary of is "foot-in-the-door" jobs.

"They didn't even give us any pants."