I'm no stranger to RPG's, but admittedly I am not the biggest fan of the genre either. For instance, I would rather endure many paper cuts than sit through Star Wars: KOTOR's sluggish pace and clunky mechanics to get to a great branching story. But in the fresh vein of Mario RPG and Paper Mario comes a refreshing splash of originality to revive the genre. 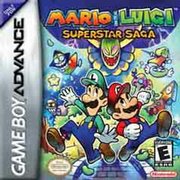 Mario and Luigi are off to the Beanbean kingdom to reclaim the kidnapped Princess Peach from the clutches of a mysterious villain. With the help of Bowser, they set off on an adventure away from the mushroom kingdom.

Right away you'll notice the tag team element of M&L couldn't be executed more perfectly. One brother's command is set to A and the other to B. When you have to jump obstacles in the overworld, you must press both buttons to get both brothers to jump. You will learn different combinations of moves along the way to jump higher, float farther, among other things that make some puzzles more complex and so much more rewarding.

In the battle sequences, you can increase your hit points by pressing the main attack button right before the hit lands. You also have a plethora of special alone and together moves that also can be powered up in real-time. Also you can dodge attacks in real-time which truly adds a level of skill. Every enemy has a different attack pattern, though, so learning to dodge isn't as easy as one battle.

There are many things to do for local townspeople along the way to obtain items. Only one particular seek and find quest really gets in the way of any fun factor, but usually the puzzle and adventure elements are a pure joy to play. If you have been a long-time Nintendo fan, you will laugh at all of the tongue-in-cheek humor along the way.

Fans of Paper Mario aren't going to get the depth or length they want out of a Nintendo RPG, but know that Saga isn't a slouch by any means. But Nintendo definitely is due for a fledged out Gamecube RPG starring the brothers any time now. We want it. They know it.

The graphics truly pop off of the small screen, with many effects pushing the sprite capabilities of the handheld. It's really colorful and impressive. The voice samples and music have never been clearer and is a stunning achievement for the small room afforded by a cartridge.