As a WWE game, it definitely stands its ground among the best the consoles have to offer.

World Wrestling is a genre all its own these days, and even when shining stars like Fire Pro come along, they still get overshadowed by the newest Smackdown, Raw or Wrestlemania game. X8 was decent, but with 45 stars and 20 unlockable characters, I am here to happily report that XIX is among the best wrestling games out for the Gamecube, if not the best. 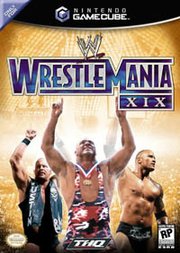 Developer Yuke seems to have taken hints from the older N64 brothers and retooled the controls to be uber-smooth. Tapping or holding the A or B button performs a weak or strong grapple or hit, respectively, and pressing a direction while performing one of those presses executes a different move entirely. The amount of moves runs so deep but never gets too unintuitive. This makes the experience fun for even those who think the WWE is ridiculous. The speed and difficulty of lifting and slamming to seem to be proportionate of the opponent's weight much more than X8. Your new spirit meter can be filled to execute special moves which also change upon locational context.

From Exhibition to Royal Rumble, there are almost an endless amount of modes to play in XIX. None are more welcome than the Revenge mode. Here you get several missions to complete in order to screw up Vince McMahon's plans for the big XIX event. You get some tips and must travel to different locales like constructions sites and malls in order to fight your way to the end where you fight Vince himself.

At any given time when having to fight more than one opponent simultaneously, the difficulty almost gets unfair as you will most likely not have many chances to recover before you are ultimately beaten. This happens all too often and really brings the experience down in an otherwise polished game.

The create-a-superstar mode is so incredibly deep. You can customize each move, entrance, looks, and many other items to a sickening degree. You could spend hours just trying to get your first character going, if you take it seriously.

The graphics do a really nice job representing the plethora of wrestlers. The presentation is pretty intricate and you will even find short cutscenes in the ring when performing something cool. The sound effects are okay and don't pack the thump you would expect from a wrestling game but are great samples nonetheless.

As a WWE game, it definitely stands its ground among the best the consoles have to offer. I recommend anyone interested in the fighting genre to pick it up as it will please beyond the WWE fanbase.