After the novel style, it's a lose-lose situation.

Cel-shading, whether you like it or not, has a unique style. XIII (Thirteen) took the style, added some blood, cussing and mystery to create its aura. The trouble is, once the novelty wears off, there is little that sets it apart from the other 3,251,465 (my rough estimate) first-person shooters out there. 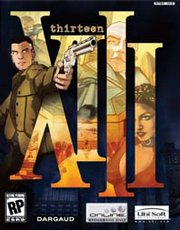 You are XIII. You have amnesia. Apparently you shot the President and the government is pissed, naturally. Each level you discover clues to your mystery, revealing the true story. The dark comic book, b-movie style is a nice change of pace considering the plethora of games that take themselves a bit too seriously this year.

People who followed Ubisoft into the slightly blah Rainbow Six 3 for the Xbox will be met with the same frustratingly inefficient, dual-sensitive control set-up that has no place on a console. Even with the look sensitivity set to high, looking and aiming tend to be sluggish. Not to mention that your enemies are great shots. This becomes incredibly apparent when in an unavoidable multi-enemy melee, and you have to reload, but reloading any weapon takes so long that you it's a race to use up med packs slower than your reloading animation.

The level designs are your normal, retrieve this document, turn this switch, blah blah blah that have been done 3,251,465 times before. Also, the levels don't last long, once you learn where the platforming elements are. Yes that's right, there is a slight amount of platforming to be done. If you aren't looking straight down in some areas, you will fall to your death, only to be thankfully restarted at a checkpoint to remember where the unseen pit was.

There seems to be no real polish to any collision detection throughout the game which alienates the gamer even more. However, enemies do hiccup and jerk when you shoot them, adding to the sense of completion upon a kill.

Multiplayer maps are uninspired, barren and mostly claustrophobic, leaving much to be desired. You won't encounter any guns you haven't seen before, plotlines you haven't read before or gameplay elements that haven't become stale in the genre. After the novel style, it's a lose-lose situation.