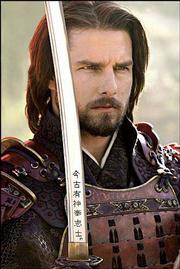 "I didn't know if I could do it, honestly -- if I could find that kind of physical elegance or movement that the samurai have," says Tom Cruise, regarding his latest role of an American soldier who casts off his old ways to become a member of a renegade group of samurai.

It's interesting to examine how Hollywood has viewed Japan recently.

Within the past few months, three high-profile films were released that all hinge on a Westerner's perception of the Land of the Rising Sun.

First came Sofia Coppola's "Lost in Translation," which centered on two Americans (Bill Murray and Scarlett Johansson) who bond with each other while sequestered in a Tokyo hotel. Through their eyes, this Eastern culture -- specifically its language, customs, humor and values -- was presented as impenetrable.

Quentin Tarantino's violent revenge thriller "Kill Bill" found its star (Uma Thurman) confronting the Japanese on their own turf and on their own terms -- in a hip Tokyo restaurant with only a sword in hand. The resulting bloodbath left the Western hero still standing while nearly 100 vanquished foes lay at her feet.

Now comes "The Last Samurai," which is probably the most respectful of these efforts in how it portrays an American's integration into the Japanese way of life. Yet this absorbing, poetic tale is also the most mythologized of these movies.

Set in 1876, Tom Cruise plays Captain Nathan Algren, a man billed as "a true American hero." Actually, he's a bitter, alcoholic veteran of one too many battles. A particular American Indian massacre that he took part in continues to haunt his soul.

When Algren's former commander Colonel Bagley (Tony Goldwyn) approaches him with a business proposition, he agrees purely for financial reasons. The task takes him across the ocean where he is commissioned by the young Emperor of Japan (Shichinosuke Nakamura) to help modernize the ruler's army.

However, a renegade group of samurai is opposed to this incursion of foreign ways. Led by the magnetic Katsumoto (Ken Watanabe), these warriors are viewed by the Emperor as a threat to his goal of opening up the country for trade with the West.

Algren is wounded and taken prisoner after his disastrous first skirmish with the samurai. Although the captain is at first treated as a "stray dog or an unwelcome guest," he gradually begins to appreciate the ways of his captors. Soon that becomes respect. Then loyalty.

Within a year, he is fighting at the side of Katsumoto against the modern armies he was originally recruited to train.

Tom Cruise stars in an absorbing, poetic tale about the war between Eastern and Western values for the soul of Japan. He's not always convincing as an alcoholic military expert-turned-swordsman, but at least he shines in the superior action scenes. Even though the film rambles on too long, it's definitely worthy of the term "epic."

While it's obvious that Cruise put a lot of time into this role -- both in handling the language and the sword -- there is still a certain quality he struggles to overcome. Cruise radiates MOVIE STAR in a part that would be better served by a character actor.

Cruise is much more persuasive in modern fare like "Jerry Maguire," where his frat boy swagger echoes the character. He still can't completely bury himself in demanding period roles like his contemporaries Russell Crowe or Sean Penn.

That said, he's quite convincing in the numerous action sequences.

It's refreshing to see a martial arts-heavy project that isn't choreographed with the circus-like histrionics of master Yuen Wo Ping, who seems to have a hand in nearly every Asian-influenced movie released, from "Crouching Tiger, Hidden Dragon" to "The Matrix" to "Kill Bill."

This is a film where the hand-to-hand fighting relies on pure precision not rope tricks and gymnastics. These frequent combat scenes -- the highlight of which is a night-time attack by masked assassins -- are undeniably thrilling. Most importantly, they feel authentic.

Director Ed Zwick ("Glory") has shown himself a master of coordinating large-scale epics, and he does not disappoint here. Perhaps Zwick's standout sequence is during Algren's first encounter with the samurai. As his raw troops await the clash, the mood expertly shifts between suspense, dread and despair. When the samurai do emerge from the misty forest, they appear like masked ghosts.

The film's main theme of a traditional way of life threatened by modernization leads to a climactic battle between the samurai and a technologically superior army. Algren's story builds to a profound, resonant end -- then it goes on for another 10 minutes.

The script (by "Gladiator" scribe John Logan and co-producer Marshall Herskovitz) insists on adding a lengthy, extraneous scene with the wimpy emperor that throws cold water on the emotional mood. Then this is followed by voice-over narration that ties up everything in a neat bow. Cue commercial ...

Ultimately, however, "The Last Samurai" is caught in a cinematic catch-22.

This type of film benefits greatly from a $100 million budget. (It's impossible to envision the picture staged properly as an indie production.) This adds up to period detail that is exquisite. The cinematography, the costumes, the choreography and the locations are all top shelf. The international supporting cast is impressive.

The one provision is it takes a big-time movie star to recruit the amount of financing that allows for all these elements.

Cruise tries hard to make us believe he is a spiteful, post-Civil War military veteran who turns into a lethal samurai warrior. Often, he just comes across as Tom Cruise wearing a kimono.