Can it compete with the SSX series? Find out here.

1080 took the gaming world by storm when it debuted on the Nintendo 64 with awesome graphics and a great sense of snowboarding speed. It inspired many clones that weren't really worthy until SSX came out for Playstation 2. In 1080 Avalanche, Nintendo stakes its claim in the racing aspect of snowboarding, leaving deep trickery to the SSX series. But does it still provide that 1080 thrill? 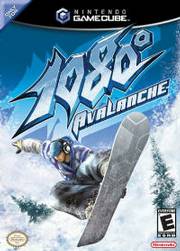 You'll start with five selectable boarders including the old Rob Haywood at the helm. Each boarder has immediate strengths and weaknesses that can be tweaked by the different boards you unlock later. There is the main Match race mode, seasoned by the lesser Trick Attack, Time Trial and Gate challenge modes. When all is said and unlocked, there are over 20 courses to traverse.

Immediately notable from a control standpoint is that, unlike SSX, the jump and "go faster" button are different. To slightly crouch and increase your speed, you press L with the jump button remaining on A. This small element makes a huge difference. If you are racing downhill and come upon a sharp turn, you can let off the L button to make more distinct turns. In SSX, you have no choice but to perform a jump to get back to a sharp turning stance.

The overall snowboarding control is fairly tight. If you make a sour landing, you won't automatically fall. You will have to shake your analog stick to regain the amount of balance you lost. This adds another great element to the fold.

Unfortunately, you must hold R and press a direction to spin. This seems like a decent way to go about it unless you are trying the trick attack stages where the element shows its weakness while trying to combine it with certain grabs. Even though there are nowhere near the amount of tricks to complete as in SSX, the trick system sets the bar to high for how much the control impedes both your enjoyment and ability. In fact, learning to tame the system can be downright maddening at times. That being said, it is something you can get used to if you have the patience.

Regardless, I'd like to think 1080 is more about the racing as it was before. The amazing sense of speed is augmented by snowflakes flying at the screen at a blazing pace while you pass vacation skiers along the way. The end of each match race grouping is an avalanche challenge that provides an even greater rush as you escape its treachery. Weaving in and out of the obstacles can be quite a thrill.

Unfortunately, the framerate never locks in at the aimed 60fps. It dips to 45-50 often and sometimes even pitfalls below 30. Obviously this seriously hinders the sense of speed and is incredibly uncommon for a first party Nintendo game, especially given the solid performance standards for Wave Race: Blue Storm and F-Zero GX. I dare say that Nintendo may have rushed this out for the holiday season, a trait uncommon to the Japanese-based company.

The game itself doesn't last very long and the courses are extremely short for the most part. The four-player split screen mode is pretty fun, especially since the framerate stays consistent, more so than the single-player campaign.

The soundtrack departs from Nintendo's flagship bad-techno-but-somehow-endearing concept and gets some licensed tunes From Seether, Cauterize, Boy Sets Fire and others. The sound effects are pretty nice and the avalanche rumblings from behind are a great addition. The graphics get the job done but lack the prowess we've come to know from Nintendo. However, they are solidly functional.

Overall it's really hard to recommend 1080 over SSX purely on its better sense of speed and navigation upgrades when SSX 3 is an extremely robust experience. Still, it is something all Gamecube owners should experience at least once to get their speed fill.