Are you ready for a big dose of confusion? 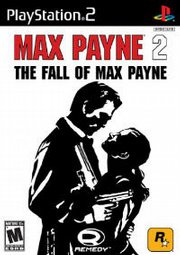 I want preface the review by saying that this is not a review for Max Payne 2 as a whole. It is specifically for the PS2 build. Most of the time, the differences between console versions of games are so minimal it hardly warrants a different take. This is the first time that the disparity between versions is so big that this drastically inferior PS2 version gets a review all its own.

Max Payne 2 continues the trail of our cursed hero through yet another entanglement of love, betrayal and death. Experienced through the same dark presentation as the first, it's easy for fans to pick this up and go.

Max Payne perfected the now overused bullet time effect with flawless control and button mapping. It's no wonder they hardly tweaked the feature as it still works as well as the first game. This time, the more you kill in bullet time, the better and faster you can maneuver within it, making these gameplay elements less of a challenge and more about how many you can kill. Still, the element is as fun as it was before, even though it decreases the difficulty.

Garner your gaggle of weapons while roaming around in the highly interactive environments for an experience that is more enveloping than most run-and-gun shooters out there. There are a few new weapons to be seen, but the overall arsenal he comes across is the Max Payne standard.

For an action game, Max Payne was on the short end of a medium-length game at about ten hours. Max Payne 2 can be run through in about six hours. The New York Minute mode returns but the new Dead Man Walking mode proves to be more fun this time around. You will start a certain part of the game, most likely one with a spacious environment, and a plethora of enemies will keep coming at you. The objective is to kill as many baddies before you die. Good times.

This is all set up for a great time with a great game. Unfortunately this version is littered with so many technical problems that it barely warrants it as playable. We know Max Payne for PS2 was a port of the Xbox version which was a port of the PC version. Here in the sequel it's the same food chain but the results are even worse than last time.

We know the PS2's power is lacking comparatively, but there is no excuse for the poor, angular character models that abound. It's noticeably poorer compared to the other versions and can be likened to a first generation N64 game. So can the textures. Looking at the detailed and beautiful texture maps on the PC really bring out how bad the PS2 version looks. Blocks of blurry gray and brown are stretched out for floors and walls; it's a sorry excuse for scenery.

Okay, Matt, so it's ugly, does it make the game that bad? No it doesn't. What makes the game almost unplayable is a combo of an incredibly low framerate, bad audio, severe load times various glitches in presentation. Max Payne 2 is a game prided on beautiful presentation and set pieces/environments that wow. The PS2 retains none of that.

May God help you if you encounter multiple enemies. The framerate gets so low, you will think your PS2 is about to detonate or something. Of course, as we all know, slow framerates make moving and aiming a daunting task, likened to a bad internet connection with severe lag. You will get this feeling here. Also, you will hear repeated death yells and witness some very choppy character animations that don't look anything like their impressive PC and Xbox counterparts. The PS2 sound bank has been cut drastically apparently because of port performance issues. The load times tend to cut in too often and the hiccups in general gameplay along the way really take away from what proves to be an enjoyable experience on the other two versions

It is playable. But it is riddled with problems. If you only have a PS2 and just can't get enough Payne, then you may want to rent it if you are still morbidly curious. But honestly, for Rockstar's sake, bum a good PC or Xbox from a friend and play one of those versions so you can appreciate the good work Rockstar did on the sequel; you won't be able to on the PS2.