Can a comic book game actually be good?

There is a long line of comic book heroes waiting for a game to do them the justice they do for the world. To date, nothing from Spider-Man to Hulk really attains that goal. How does this newest Spawn game fare? 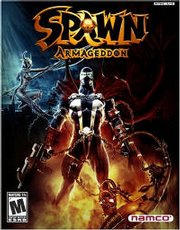 Those familiar with the wife-dead-hell-and-back-revenge story will have hardly anything to gain from the "new" tale found in Armageddon. You'll see the likes of The Redeemer and Violator in your travels, among other Spawn faithfuls. Still, the entertainment value of the presentation, although beautiful, is rather tame and slides by.

From the third-person perspective, you can use your chains, axe, different types of magic and a variety of weapons as you float and double jump in 3-D environments, slashing away mindlessly at foes. The weapons, magic and overall ability can be upgraded along the way just like in Devil May Cry. But you can do just fine using your axe's basic hack and slash function to get you through the whole game. It totally de-emphasizes the use of the few, but cool, other weapons and magic you encounter.

The enemy AI is glitchy and easily overcomeable. No pattern takes more than a few seconds to memorize, which goes for sub-bosses as well. Many level designs can be confusing in spots, especially since the camera can perform some hypnotically gyrating motions sometimes. I've heard from other critics that the Gamecube version suffers more glitches than the other two, but I had no such experience.

In short, Spawn: Armageddon plays a lot like Devil May Cry. Only that it's not as smooth or inspired as the game it patterns most of its gameplay after. Still the game can have spots of fun while it lasts and shows promise for future Spawn games. There is still no clear victor in the long line of comic book leavers though.