With more content, this could've been a solid front-runner for Game of the Year

By by Alan McFann - guest reviewer

When the philosopher Nietzsche titled his first book "Beyond Good and Evil," he more than likely had no idea that Rayman creator Michael Ancel would borrow this title for one of his most ambitious titles to date. Beyond Good and Evil follows the mission of Jade and her uncle Pey'j to free the citizens of Hillys from the invading DomZ. Right from the start, it becomes clear that those who supposedly are there to protect (Alpha Sections) are actually allied with the invading alien race and have no intention of helping the citizens. Throughout the game, Jade and her uncle's purpose is to take pictures and to show their fellow citizens exactly what is going on behind closed doors. 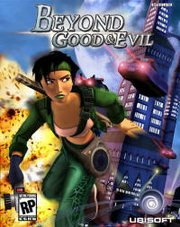 The presentation is heavily movie-like. However, unlike games such as The Bouncer, BG&E pulls off the entire effect perfectly. This is done through things such as the the game entirely in widescreen. It takes a tad getting used to, but then it just fits in naturally with the game. Other things such as slow motion during battles (not bullet time, just put in at certain spots during boss battles) also help make this movie-like presentation go a long way. Even escape missions come off very well and were the best parts of the game.

Simply put, the graphics are gorgeous. Colors are vibrant and display the entire world of Hillys beautifully. Character models are detailed and fit each section perfectly. Even though it is not a major part of the game, the water effects are done very well considering none of the main action takes place there.

Rounding out the presentation department is the music and the sound of the game. While this isn't truly a focal point of BG&E, the music that does wander in (usually due to important story elements) is very good. Either piano melodies, percussion beats, or orchestral arrangements with vocals during times of utmost importance will dazzle your ears. Only during the hovercraft races can the music be somewhat of an annoyance.

Gameplay can seem basic at first, but everything eventually comes together in an addicting fashion. Controls are context-sensitive like Zelda games and are very simple to master. The gameplay itself is divided up into three different areas: fighting, stealth, and flying. Fighting is limited to attacking with one button and dodging with another. While it isn't the deepest system for battling, it gets the job done and comes off seamlessly in boss battles (which can be on the easy side until the end of the game). The only problem I have with the action elements is that the camera can occasionally get stuck behind walls, but not so much that it hinders play.

The stealth system is by no means on par with the likes of Splinter Cell, but is very challenging on its own merits. These parts become more of a trial and error issue rather than instinctively knowing where to go. Also, there are times where one can simply choose to fight the enemy rather than sneak away from it and if you do get in a bind, running into a dark corner will quickly send the enemy away. Finally, the flying areas are enjoyable and make for a nice departure, but are by no means realistic.

Adding a unique flavor is the use of a camera within the game (an intentional photographical camera, that is). Jade can make money by photographing different species of animals on the planet. This can become a very obsessive side quest. Also, the camera must be used in every mission in order to photograph evidence of the Alpha Sections in league with the DomZ. If you weren't a fan of scanning in games like Metroid Prime, the camera quickly shows you what pictures need to be taken. Just simply zoom and have good framing and it is as simple as that.

There are also other numerous side quests. You can seek and find pearls which are necessary to obtain upgrades in order to progress further in the game. It can add some good hours since the game can take around 10 hours or less to complete without going on any side quests. You can also participate in races and compete in a few other mini-games as well. While these quests are the greatest aspects of the game, they can seem extraneous.

In the end, you will realize that you just completed a game that through its slick presentation told a wonderful story. And since the game is so easy to pick up and challenging enough not to put down, you'll also realize that this is one of the best games of the year. However, the game could have lasted a bit longer and provided some more to do. Then perhaps it could have been one of the best games of all time.