It won't make you mad like last year's edition, but it won't excite you like ESPN College Hoops either

EA made many people mad last year. No, not mad like March Madness, but mad since its 2003 NCAA basketball game was so bad. This year, March Madness 2004 sports a deep facelift with robust options and modes, but still can't match the quality or atmosphere of ESPN College Hoops. 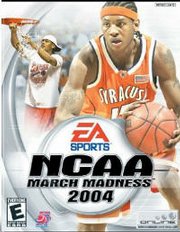 Some will charge that the defensive AI on March Madness better represents the college atmosphere. But with the better amount of sliders and variables on ESPN College Hoops, I couldn't disagree more, especially since March Madness doesn't seem to pinpoint the defensive differences between a tough Illinois team versus, say, a slush Marquette defense as well. The overall attributes of college teams don't seem to materialize on the court that well here in March Madness.

Sure, you've got more teams, options, modes to take you through a full season with video tips from real coaches, but nothing is streamlined in any polished fashion. This is readily apparent when trying to navigate through an almost impenetrable roster changing mode. Trying to recreate the names of your teammates will be a total chore, making the guy on Ebay selling the full rosters for $10 a hero. The Dynasty mode is shallow and flawed with respect to recruiting and the commentary won't care what name you put in, it still remains the stale ambiguities of an NCAA title. College Hoops has preset names that luckily coincide with 99% of your roster, so you can hear the actual player's name.

Speaking of the commentary, I trust plain sucks. I love Dick Vitale (represented in this game), but if I have to choose between Dick saying thinks completely unrelated to the play versus Jay Bilas' color commentary (represented in the ESPN game) that is slightly behind sometimes, I think the choice is obvious. Not only that, but both Dick Vitale and Brad Nessler will repeat themselves constantly.

Character models are wonky. Most of them look like bobble-heads playing basketball. It just looks weird. The arena models, although accurate, suffer from a severe lack of polygons. The overall look is really dated.

Atmosphere is a collective effort. The bad commentary, dated graphics, shallow modes and modest customization combine with great crowd noise, real mascots and alma maters to create a very average college atmosphere. Also, the control, while basically mimicking NBA Live, doesn't seem to respond as well as its NBA big brother. The flow shares much more similarities with the NBA than it should.

Thank God March Madness doesn't suck like it did last year. But I hope that we can all take a deep breath and realize that the EA name does not a superior product make.