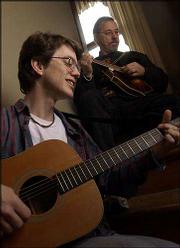 Americana Music Academy assistant director Michael Paull, left, and director Thom Alexander practice a bluegrass piece on the stairs of their Lawrence academy. The pair are gearing up for a special Christmas performance at Turnhalle, 900 R.I.

Until then, Thom Alexander will be perfectly content to put on his Americana Music Academy Christmas Concert at Turnhalle, a 147-year-old stone edifice that humbly presides over the corner of Ninth and Rhode Island streets. Though the building -- which served as a meeting hall for the town's German population until World War I and has been host to a grab bag of tenants since -- is rarely used for large events because of its age and fragility, it should come alive with music and cheer Saturday.

Dancing would provide welcome relief for Alexander, who has foregone a steady salary and any notion of free time for the past three years to get the nonprofit music academy in a position where it can pay its teachers and cover its rent. Since opening its doors in January 2002, the academy has grown to include nearly 30 teachers and more than 600 students (up from 387 students at the end of 2002).

Now housed in a three-story house at 1419 Mass. (the academy spent its first year in an office space at the corner of Seventh and New Hampshire streets), the school has a comfortable space to expend its ever-growing catalog of private lessons, classes, workshops and community outreach projects.

Though the school appears to be laying the groundwork for a long and healthy future, Alexander admits he still spends the majority of his days contemplating the school's financial security.

"It's the cross that hangs on my back every day of my life," he says. "But it gets a little easier to carry every month."

The academy was host last year to its inaugural Christmas show at Liberty Hall. The event attracted more than 100 people but only raised about $200 for the academy due to the cost of renting the venue (even though Liberty Hall gave Alexander a discounted rate).

"I didn't feel particularly right not being able to pay a fair price for Liberty Hall because it's a really nice hall," Alexander says. "With Turnhalle, we can do it there until we get too big for the place."

The all-day event will showcase the school's teachers and students, who will perform on the expansive stage while spectators browse tables of crafts and baked goods. Highlights include performances from Judy Coder and Pride of the Prairie and The Euphoria Stringband.

"We want to make it a fun Christmas event for the community," Alexander says. "Part of this is giving kids an opportunity to get onstage and play for moms and dads and grandpas and grandmas."

The event will cap off a busy second year for the academy. In addition to doubling the number of students, the school added a recording studio and began developing an archive of area folk music. Other highlights included workshop visits from elite musicians such as fiddler Rodney Miller and finger-style guitarist Nick Charles.

"From a realistic standpoint I don't think we could have picked a better place (than Lawrence)," Alexander says. "The wait-and-see attitude of a lot of people is finally starting to go away and they're starting to say, 'I want to be involved.'"

The eternally optimistic Alexander has yet to earn a steady salary from the job, instead relying on income from teaching guitar lessons and government support for his son, who has autism.

"If you expect a business to take off in 30 days or even three years you're kidding yourself and you shouldn't go into it," he says. "But the word's out about the school now, so we're getting a lot more people calling every day. We're offering a wider range of classes and I think next year we're going to see a turn."

Jim Slough, left, and Dick Rector are tenants of the rarely used Turnhalle, 900 R.I., which will be host to the Americana Music Academy Christmas Concert on Saturday.

The oyster and the pearl

Turnhalle looks to be a fitting venue for a concert by a group that cherishes the antique and the peculiar. The building's cracking plaster and water-stained walls have a time-worn quality reminiscent of a century-old folk song. Four majestic rectangle-shaped windows line each side of the 3,000-square-foot hall, blanketing the stage with a softly filtered light.

The only heat in the building comes from the giant glass-blowing furnaces in the basement, which for the past 20 years has housed Lawrence Free State Glass.

Free State Glass co-owners Dick Rector and Jim Slough took over the lease on the main hall two years ago, using it as an additional workspace and venue for the company's holiday parties.

"This building has a spirit that reaches out to a lot of people," Slough says. "We'll be down here working and people randomly come in off the street and say, 'When I was a kid we came in here and bought our starter chickens.'"

Rector, who serves on the academy's board of directors, offered the hall to Alexander free of charge for the concert (though he emphasized that it isn't available for renting to the general public).

Alexander says he thinks it could be a spot for the academy to do monthly shows.

"If I had my druthers and I could get my hands on some real money I'd like to see it preserved, too, because it's just a tremendously cool little place," he says. "It's not the kind of place where you'd want to have a wedding, but it's perfect for a community nonprofit that doesn't have a lot of money."

Rector says he would like to buy the building and restore it, but owner Rod Ernst -- who inherited the building from his father -- declined his offers.

"He's got family sentimentality attached to it, and I can appreciate that," Rector says.

In between preparations for the show, Alexander is busy outlining his goals for 2004. Among those goals: a program that will provide 20 low-income children with free mandolin lessons, and free mandolins to those who stick with the program long enough.

"I'm really looking forward to it because it's going to be our first community outreach to the roots music population outside of what we've done with music therapy," Alexander says. "(Lawrence) is a good, safe place to be poor, but being poor is still being poor, and we're going to find a way to get those kids the opportunity to play music."

Alexander also is hoping Kansas Public Radio accepts his proposal to be host to a weekly two-hour radio show.

"If the heavens open up and KANU was to say, 'Yeah we want to do a show with you,' the three of us, who would disc jockey it, already have 25 weeks worth of bands ready to come in," he says.

As the academy enters its third year, Alexander will have a number of helping hands, including assistant director Michael Paull and an ever-expanding board of directors.

"We want the community to realize that this is a resource," he says. "We've really been given a wonderful opportunity and I ain't about to let it go by."