He keeps the real things in a spacious pen a few dozen feet from the back door of his rural Jefferson County farmhouse. 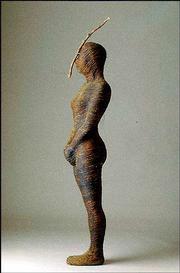 And though it may seem circuitous, those seven chickens say a good deal about Hachmeister's artistic philosophy, which has much less to do with theory than becoming intimately acquainted with materials.

At a group art exhibit that opened recently in Kansas City's Crossroads Art District, a playful poultry dwelling installation by Hachmeister greeted gallery-goers as they walked in the front door. Three chicken houses -- shrunken versions of a vernacular residential form in Lucas, a rain forest longhouse in the Philippines and a Tibetan monastery, tapered from bottom to top -- sat on a bed of straw, each lit from within. Hachmeister, who curated the show, hauled his very-real rooster and six hens to the opening reception to help illustrate the point of the piece, which he calls "Artful Living."

"It is all about how life doesn't have to be drab for anything, including what we eat," he says.

At 54, the Kansas University sculpture professor has long been adept at combining art and life. He carves, sculpts, constructs and casts raw materials with seemingly effortless ease into works that comment on the human condition. He recently selected 20 like-minded artists -- area university faculty who work closely with materials -- to contribute work for "Teaching the Object," a major exhibition that fills three floors of an old building next to the Arts Incubator in Kansas City, Mo.

"I think that art and life are one. I think that what you believe in, that's the way you should be living," Hachmeister says. "I believe in the creation of value, and I talk to my students about how I don't believe in buying really expensive art supplies and then just burning them up. I believe in creating what we need -- not to a great extreme; I'll buy art supplies -- but I believe that when you're finished, you should have more than you did when you started."

Hachmeister mingles with gallery-goers on opening night of "Teaching the Object" at the Arts Incubator in Kansas City, Mo.

"Anyone who makes objects loves the learning process of working with a material," he continues, "and they love what the material teaches them and what they can teach the material to do."

Through the years, as Hachmeister has all but exhausted what he can learn from a given material, he's moved on. After earning his bachelor of fine arts from KU in 1972, he designed award plaques and wall modules in Kansas City. He quickly tired of the limitations of commercial art and began working on his master's degree, splitting his time between Kansas State University and the University of Iowa, where he was part of the first group to learn iron casting from Julius Schmidt, who pioneered the process as a studio art.

Hachmeister ran a bronze foundry for a while, made jewelry in New Mexico and even worked as a brick mason.

After marrying, moving to his farm south of Oskaloosa and working as a full-time studio artist for several years, Hachmeister finished his MFA and, within a matter of weeks, found out the Garden of Eden in Lucas was for sale. Although he didn't have the money to pay for the log cabin and sculptural representation of the biblical Garden of Eden, Hachmeister formed a corporation, which continues to own and maintain the site.

After several years of driving back and forth between home and the maintenance-heavy museum, Hachmeister, looking for a change, ended up accepting jobs teaching sculpture at Johnson County Community College, the Kansas City Art Institute and KU.

"At one time I was teaching at three schools," he says. "It was kind of weird. There were some mornings where I'd pull up to the paved road and I'd have to stop and think, 'Am I turning left or right? Which day is it?'"

Hachmeister isn't hard to pick out of a crowd. That's due mostly to the distinctive mustache that extends down past his mouth and about an inch below each side of his chin. He's tall, thin and most often wears blue jeans, lace-up boots and button-down shirts. The look reflects his practical nature.

Hachmeister's diverse artistic background and his environmentalist sentiments have led to a career-long commitment to creating art with "everything that's around."

Take "Jupiter's Moons," a piece he made specifically for "Teaching the Object." The installation juts down from the ceiling like three stalactite luminaries in a dark cave. The longest of the forms -- organic inverted teepees wrapped in Tyvec, a high-density fabric used as protective cover on houses -- stretches 11 feet, 4 inches. 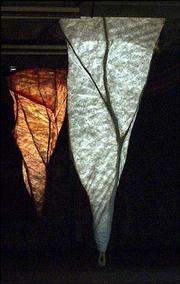 The Tyvec is mounted on wooden frames Hachmeister carved from trees on his property that he cut down after they died. The Tyvec was part of an accidental surplus he ordered with a printmaking professor at KU.

Hachmeister has transitioned from ceramic to wood to bronze to cast paper to concrete -- the list continues to evolve.

"There's a point where you realize you've gotten really good, it's easy to do and there's less learning in it. It's more just a product. You're just kind of cranking this stuff out," he says. "And I never really wanted to do that, so I kind of would drift to another material so that I would have some self-imposed freshness in my work."

One of Hachmeister's signature pieces -- though it's impossible to nail him down to a defining piece -- is "Study for Cranach's Tree." It looks like a real piece of fabric blowing in the wind, barely hanging on to the tip of a branch. But it's carved entirely out of cottonwood and walnut.

It's Hachmeister's commitment to materials -- and his undeniably exquisite skill in working with them -- that impresses his students.

"He really has an amazing skill as far as rendering things," says Jay Gordon, who took a KU sculpture class from Hachmeister in spring 2003. "Something he warned us about was getting too good with a material because then it becomes too easy. He was always pushing me to experiment with different things, and I'm really glad he did because it's become such an integral part of my process now."

Hachmeister maintains about six studios on his property, but it's hard to determine where one ends and the next begins. There's the giant barn that's currently off limits to visitors because he's working on his next top-secret art project. Then there's his "rustic parthenon," an outbuilding open on three sides and based on an early 19th century American architectural form.

But when the weather allows, Hachmeister's much more content to take his work outside, where the ever-changing natural light colors his work with life-like complexity.

"Study from Cranach's Tree," cottonwood and walnut, by John Hachmeister

He'll sometimes start a piece acres from home and then bring it closer to finish up. He also built a portable studio -- a small house with four walls and a roof -- that he can tow into the native grasses during the winter and under the trees in the winter to conceive of -- not create -- art.

"Sometimes what we all need and we don't allow ourselves is time to think," he says. "We don't let things ferment in our mind. Sometimes you just have to remove yourself so that all that noise falls away."

Other times, Hachmeister draws inspiration from dreams. But always, he's searching for some essential truth. That's why skeletal forms often crop up in his work.

"It's more universal than putting flesh on," says Hachmeister, who in his basement keeps a real human skeleton he picked up at an auction. "As soon as you put flesh on, you're putting on certain qualities. But when you get something that's skeletal, you're to the basics."

A kind of magic

If he weren't teaching, Hachmeister says he'd probably go back to being a studio artist. In the mean time, he's doing what he can to help fledgling artists jump-start their careers by serving on the board of Kansas City's Arts Incubator. He describes it as a halfway house for art-school graduates. It provides them with low-cost studio space and other resources to get them ready to work on their own.

There are days he thinks about quitting his teaching job, but he's always pulled back by a sense of duty to impart knowledge, give something back. Either way, he'll continue to feed his creative impulse.

"Some of my pieces are strictly equations that I am working on that explain the human condition, explain what I am," he says. "With some pieces, I really am speaking to other people, not in a literal sense, but in what I consider a very important sense, a visual sense, which is about wonder, the unknown and the sort of transcendent experience that we can, on occasion, have only through that kind of magic that an artist does."