Meet the new Powerpuff Girls, a league of superheroines that includes Hilary Duff, the Olsen twins, Keira Knightley, Raven and an ever-growing number of recruits who are learning to deal with worldwide fame at about the same time they're learning how to drive.

The entertainment business always has been fascinated by the young, but never before have young women had this much clout.

In 1992, the average age of leading ladies in the 10 highest-grossing movies was 33. Last year, the average age was only 25, with such stars as 20-year-old Kirsten Dunst ("Spider-Man"), 21-year-old Natalie Portman ("Star Wars: Episode II -- Attack of the Clones") and 12-year-old Emma Watson ("Harry Potter and the Chamber of Secrets").

Beyonce Knowles, who turned 21 in September, is this year's Queen of Pop. Britney Spears celebrated her 22nd birthday last week with an album that debuted at No. 1.

And look out for an even younger generation, headed by Duff, 16, who has a hit film ("The Lizzie McGuire Movie") and has sold 2 million albums.

"I just think the times are changing," said 17-year-old Amanda Bynes, who has her own TV sitcom, "What I Like About You," and saw her 2003 movie, "What a Girl Wants," take in an impressive $36 million at the box office. 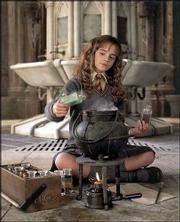 Emma Watson stars in the movie "Harry Potter and the Chamber of Secrets." She's one of a growing number of younger female actresses proving bankable to the American film and music industries.

"Kids want to grow up faster. A 12-year-old today is like a 22-year-old was in the '50s," said Dan Schneider, the producer who cast Bynes in Nickleodeon's "All That" when she was 11.

It's hard to believe that Knightley is only 18, especially after the year she's had. She appeared in three major movies -- "Bend It Like Beckham," "Pirates of the Caribbean" and "Love Actually."

Ideally, Knightley said, she would have gone to college before becoming a movie star. But that's a risk she couldn't afford to take.

"Acting is not a profession in which you can say (that) because I'm being offered the jobs today, I'm necessarily going to be offered them tomorrow," she said. "There's a point where you have to go for your dreams and just see how far they take you."