New York — Normally a champion of arty, independent fare, the New York Film Critics Circle on Monday chose "The Lord of the Rings: The Return of the King" as the top film of 2003.

The three-hour-plus epic, which is the final part of the "Lord of the Rings" trilogy based on J.R.R. Tolkien's fantasy novels, is a sweeping spectacle of computer-generated imagery -- and it couldn't be more different from the rest of the films the group honored.

The critics group, composed of writers for the city's major newspapers and magazines, usually recognizes films that stand as an intellectual counterpoint to the Oscar voters' more traditional choices.

In 2002, the critics picked the '50s melodrama "Far From Heaven" as the best film; the Oscar went to the musical "Chicago." In 2001, David Lynch's "Mulholland Drive" was the group's choice for best film; the Academy Award went to Ron Howard's "A Beautiful Mind."

This year, the New York critics chose "Lord of the Rings" because it's "a masterful piece of filmmaking," chairman Andrew Johnston said.

"It's just beautifully made, it's pure cinema, it does everything," said Johnston, a critic for Radar magazine. "It's got amazing, epic scope to the drama, to the battle scenes, a lot of strong emotional stuff, really complex, well-rendered characters and effective comic relief where it needs it."

Tom O'Neil, author of "Movie Awards" and host of the awards handicapping Web site GoldDerby.com, said he was "totally stunned" by the group's choice for best picture.

"This pushes 'Lord of the Rings' to the Oscar forefront," he said. "The critics usually go for little indie movies. When they go for the blockbusters -- 'The Silence of the Lambs' or 'Schindler's List' -- they usually go all the way."

Johnston said choosing "Lord of the Rings" wasn't a radical departure for the New York Film Critics Circle. Other films in the running for the top honor were "Mystic River," "American Splendor" and "Lost in Translation." 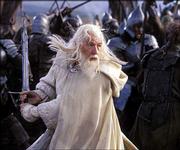 Ian McKellen as Gandalf battles evil in "The Lord of the Rings: The Return of the King." The New York Film Critics Circle on Monday chose the final film of the "Rings" trilogy as the top film of 2003.

"All the films we tend to go for tend to be ambitious films that take chances," he said. "Making something on this scale -- all three movies at the same time, New Line betting its very existence on the success of the project and having it turn out far better than anyone could have imagined -- is very much in same line as many of our past winners."

The critics chose Sofia Coppola as best director for the dreamlike "Lost in Translation," about an aging actor and a young wife who become friends while suffering from jet lag at a Tokyo hotel. The film's star, Bill Murray, was named best actor.

Hope Davis was the group's choice for best actress for her work in two films: "American Splendor," in which she plays the bookish wife of comic book writer Harvey Pekar, and "The Secret Lives of Dentists," in which she plays a dentist and part-time opera singer who's having an affair.

"The Secret Lives of Dentists" also was honored for its script by Craig Lucas. 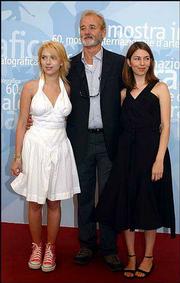 In the supporting acting categories, Shohreh Ashdaghloo won for playing an Iranian immigrant in "House of Sand and Fog," and Eugene Levy won for his role as a washed-up folk singer in "A Mighty Wind."

The twisted French film "The Triplets of Belleville" was the group's choice for best animated feature.

Cinematographer Harris Savides was recognized for his work on two films by director Gus Van Sant: "Elephant," about a high school shooting spree, and "Gerry," in which Matt Damon and Casey Affleck wander through the desert and barely speak.