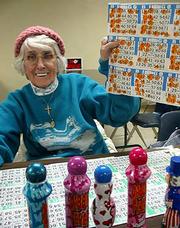 For the last 20 years, Marsha Martin and Stormy Samuel have been bingo buddies. The two women, both retired and approaching their 6os, spend four to five nights a week playing bingo in Lawrence. When they can't find it here, they drive to Ottawa.

Tonight, Martin and Samuel are among the 80 players who have braved the freezing temperatures to play at the American Legion. The mess-hall-sized room is abuzz with friendly conversation as people buy $15 sheets of bingo cards, enough for two hours of bingo action. Before the first game starts, people grab drinks and snacks at the concession. A cloud of smoke forms in the hall, undeterred by the filtering fans above. As the caller begins yelling out numbers in 10-second intervals, the conversation quiets below the slight patter of colored dabbers marking cards.

"I can't ever remember not playing bingo," says Samuel, intently marking up the 18 bingo faces on her table.

Without old-line bingo junkies like Martin and Samuel, Lawrence's three active bingo halls -- which benefit the charitable organizations that host the games -- would hardly stand a chance of surviving. Sparse turnouts among 20-somethings indicate the bingo torch isn't being passed on to the younger generation.

At 24, Melissa Urban may be one of the few college-age kids in town who really likes bingo. She's tried to get her friends to go with her but usually the only taker is her own bingo buddy, Tawnya Browning, who she's played with off and on for more than 10 years.

"Everybody thinks it's for old people, you know 65-plus, with oxygen tanks," says Urban, a junior at the University of Kansas. "There are other younger people that go. But I think most people don't go because they've never been, they don't know bingo's totally changed. It's really serious. People get into this game -- you can feel the tension in the room."

"I'd definitely come more often if they served beer or alcohol," Urban says. Unfortunately for her -- and perhaps for bingo's popularity among college-age kids in general -- alcohol sales are prohibited at charitable games by Kansas state law.

For her part, Samuel is unhappy with another bingo law in Kansas. Kansas gaming laws cap charitable bingo payouts at $1,000 for a single game.

In their early 20s, Melissa Urban (right) and Beth Lawton are the exception to rule among the aging bingo crowd. Urban says she's game for bingo whenever she can find friends to go with her -- which isn't often. "They usually just laugh at me, give me shit. Everybody thinks it's for old people, you know 65-plus, with oxygen tanks."

"Kansas plays the cheapest bingo of any state," laments Samuel, who won $3,500 last Christmas in Texas. "And I know, 'cause I've played bingo in most of 'em."

Bingo-go-going
Lawrence's bingo halls -- American Legion No. 14, Knights of Columbus and Fraternal Order of the Eagles No. 309 -- could justifiably be called the dinosaurs of modern gambling. All three acquired their licenses in 1975, when bingo became the first legalized form of gambling in Kansas. Aside from a move towards disposable cards and a few changes in the types of games allowed by the state, bingo nights at these halls aren't a whole lot different than they were in 1975.

Meanwhile, new forms of gambling in Kansas -- casinos, the lottery and dog racing -- have sprung up at a rapid pace. Reservation casinos, such as the Prairie Band Potawatomi Bingo Hall in Mayetta (20 miles north of Topeka), lure bingo junkies with higher payouts and electronic gadgets that allow high-rollers to play dozens of cards simultaneously.

Couple those factors with an aging bingo-playing population and it's easy to see why the number of licensed bingo halls in Kansas has dropped from 553 in 1996 to 365 today.

"Many of them aren't making enough money to make the effort worthwhile," says Phil Wilkes, administrator of charitable gaming (aka bingo) for the Kansas Department of Revenue. "Some of them have told me they're actually losing money; they just do it as a community service, because there's nothing else to do." 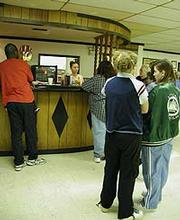 Bingoholics queue up at the Knights of Columbus concessions stand. Cokes are 75 cents; nachos cost $1.50. Extra jalapenos available for free upon request.

Known as the "Bingo Czar" to many of his co-workers and friends, Wilkes has helped steer Kansas bingo policy for two decades, first as an attorney for the Department of Revenue and now as the bingo administrator. With help from his field team, Wilkes regulates and consults charitable bingo halls across the state.

Though he admits the advent of casinos played a large part in the decline of charitable bingo's popularity in Kansas, Wilkes says a larger factor is the declining membership of fraternal organizations, which account for three-quarters of the licensees in Kansas.

"I've gone to some bingo halls in smaller towns where they've only had two to three active members," Wilkes says. "Now that most of the WWI veterans have died off, you've got a few Korean War veterans maybe ... But a lot of the Vietnam veterans didn't join because they didn't want to be associated with it or didn't have the same sense of pride as the WWII veterans."

Wilkes says the future of charitable bingo in Kansas will depend largely on the actions of the Legislature in the next decade, particularly with regard to the legalization of slot machines.

"I think in the larger urban areas there will always be some interest in bingo," Wilkes says. "But if slot machines were to become more available in the state -- especially in the veteran's halls -- then I think that would definitely hurt the smaller markets." 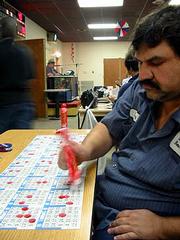 Dan Slifer, truck driver who plays before his nightly shift driving liquor to Wichita, is known in the bingo community for being one of few people who can play up to 50 faces simultaneously.

No small stakes
A glance at the three operating bingo halls in Lawrence reveals healthy, if unremarkable, crowds of 60 to 100 people a night (an avid bingo player can find a game five nights a week in Lawrence).

But those halls' gains may be a result of another hall's losses. Veterans of Foreign Wars Post 832 stopped hosting bingo last December, citing declining turnouts and competition from the Prairie Band Potawatomi Bingo Hall.

"When (Prairie Band) popped off a two-for-one ticket we watched our attendance drop from 60 to 40 and down to nothing," says VFW bartender Susie Nash. "And then they started giving away the monster pots and we couldn't compete."

VFW Quartermaster John Hughes declined to say exactly how much money bingo raised, but he did say it made up a significant chunk of the post's revenue.

"We used that to pay utility costs on the building," he said. "We're having to cut back and tighten up our bills." 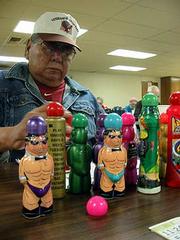 "(Without it) we might have to just rent a room in a hotel once a month," says Willis McCorkill, the Legion's finance director.

Bingoholics
While fraternal organizations depend on bingo to pay the bills, the game's players are attracted to it for a variety of reasons, including boredom, socialization and the ever-present possibility of winning a big payout.

Lawrence resident Dan Slifer says he plays because he considers bingo a healthy alternative to the bar scene.

"I used to be addicted to alcohol and now I'm addicted to bingo," says Slifer, a truck driver who commonly plays before his late-night shift driving to Wichita. "My wife would like me to stop, but we've got five kids and we make ends meet."

The straight-faced Slifer, who is known for playing as many as 50 faces simultaneously, speaks proudly of the time he and his wife hit the $500 pot three times in a month. Though the prospect of winning lures him back, Slifer says he's lost money in the long run.

"It's an addiction," Slifer says. "Some months you might break even but most months you lose." 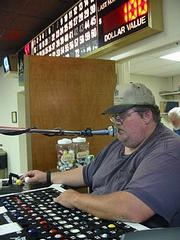 "It's an alternative to the bar scene," said Gene Mullin, Jr., who volunteers Mondays at the American Legion.

For Jim Alton, manager and sometimes caller of American Legions bingo, the game offers a welcoming social circle. Though he receives no pay for his work (Kansas law prevents bingo workers from earning any money), Alton devotes about 12 hours a week to keeping the game running smoothly.

"(The players) come up to the window and you know what they play," he says. "This year I've been to three funerals -- all bingo players."

Most bingo players, however, offer the simple explanation that bingo offers "something to do."

"It's a whole lot better than sitting in front of the TV all night," says Ernie Blue Back, a retired worker of Haskell Indian Nations University. "Unless there's a football game on; that's the only time I don't come."

Game on
On a Wednesday night at the Fraternal Order of the Eagles, the parking lot is full despite the treacherously icy roads. Inside, the scene is a carbon copy of Monday night at the American Legion, with many of the same faces and groupings.

From a table at the front, bingo chairman Moe Vogt greets his guests and sells them sheets of bingo faces. Though his attendance has been down recently, Vogt attributes it mostly to the bad economy.

"I've been here through so many ups and downs that I don't worry about it anymore," he says.

Near the front of the hall, 27-year-old Amy Howard is chatting with Louise Danis, who, despite not wanting to reveal her age, looks to be at least three times as old as Howard. The two friends provide a striking visual contrast: Howard with her 'Muck Fizzou' T-shirt, graffiti-laden hat and pierced lower lip and Danis with her snow-white hair, pink knit cap, and wrinkled hands.

Unlike Danis, a 40-year veteran of the game, Howard is a relative newcomer.

"My mother-in-law started bringing me and now I'm addicted," she says. "If I can't come I get mad."

Tonight, Danis will be the lucky one. With the help of her good-luck rubber piggy, she wins $50 on the third game of the night.

Howard won't be too disappointed if she doesn't win tonight: last week, she won $375.

"Bingo's fun," she says. "You should try it sometime."
--Phil Cauthon contributed to this story