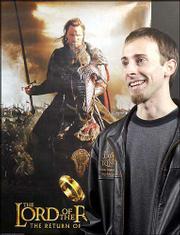 Derek Rausch spent five months in New Zealand working on the final chapter of "The Lord of the Rings" trilogy. Rausch, a Roto artist from Lawrence, helped with the film's computer-generated effects, as did his younger brother, Donny, who worked on all three films.

Perhaps no recent movie has transported viewers to another time and place as effectively as "The Lord of the Rings" trilogy.

Part of the project's exotic, untamed visuals stem from the fact it was shot entirely in New Zealand. A small army of actors, craftsmen and technicians were imported to the fertile island on the other side of the world for up to three years while each film was being forged.

Among them were brothers Donny and Derek Rausch, two digital artists from Kansas who made the 7,901-mile trek from Lawrence to Wellington to work on the cinematic epic.

"If people only knew what went into these movies," says Derek. "People can see how long they are and how grand of scale they are and be impressed, but to know what people actually did down there to get these movies done on time, it's just incredible."

The Rausch brothers at least have a pretty good idea by now.

Donny, 27, left Lawrence in 2000 subsequent to being hired as a digital paint artist on "The Fellowship of the Ring." Committing himself to several years of residing in New Zealand, the dedication started to pay off. By the second film, "The Two Towers," Donny had moved up the ranks to become a digital compositor, personally helping to craft 18 of the film's special effects shots.

By "The Return of the King," he was responsible for 40 shots.

"My job was to create and assemble various elements into a finished product, which is what is seen on film," he explains. "The various elements would include bluescreen, CG (computer-generated) creatures or characters, smoke or other environmental elements and/or scenic backgrounds. I would combine all of these and finally color-correct them to blend together to create a seamless image."

To the casual viewer, that meant giving depth to hobbits and humans, orcs and trolls (and their surroundings). And it meant breathing life into Gollum, the wholly computer-drawn character that's come to be emblematic of how to successfully unify such creations with live action.

Donny even incorporated footage of a Lawrence lightning storm (taped by 6Productions on July 21) into the skyline of a scene.

Donny Rausch, goofs around with one of the cave troll models used in "The Lord of the Rings: The Return of the King." In his right hand he holds the actual sword wielded by Viggo Mortensen's regal character.

But he didn't only work with computers. He also had dealings with cast and crew.

"I had more interaction with the actors on the previous films, which was not much," he says. "But I had plenty of interaction with (writer-director) Peter Jackson -- especially towards the end of production of 'ROTK.' The actors would come around from time to time to look over our shoulders because they were just as interested as anybody to see what we made them do."

For "Return of the King" -- the longest and most elaborate of the three movies -- extra workers in all departments were needed. ("We did 1,500 special effects shots on this movie. The first was only 400.") So Donny gave his older brother a call.

"Donny had been bothering me to try and come down there for a while," Derek remembers. "I tried to learn as much as I could with the program, as far as working on film. Once I felt comfortable, it really only took about a month to get everything squared away."

Both these natives of Hoyt (15 miles north of Topeka) had dabbled with digital technology when they came to Kansas University. After graduating, both honed their skills in the production department of Sunflower Broadband.

In July, Derek headed down to join his sibling for the final film.

"New Zealand was incredible," says 28-year-old Derek. "It was beautiful country. It definitely was great for your mindset when you're working. If you have something like that around you it just brings out energy and enthusiasm."

Derek was hired as a Roto artist (or Rotoscoper). He was one of about 25 when he first arrived -- a number that had doubled by September.

"Our job is kind of hard to explain," he attempts. "Basically, we would help in combining 2D and 3D elements with live action.

Derek Rausch enjoys the New Zealand scenery between time spent working as a Roto artist on "Return of the King."

"For instance, there were several battle scenes where horses would be running across the landscape and crashing into the orcs or 'oliphants,' the large elephants. All the horses with the Rohan soldiers were shot on green screens and blue screens. Some of the time they did not key out correctly -- like the grass by their legs would be an odd color. So I would go in and outline all the horses' legs and animate them with the scene."

Donny says of his brother, "I gave him his first shot (to work on). I was probably a little more impatient with him than with others who would perform tasks for me. But he became very good at his job."

Because the pressure was relentless to get "ROTK" ready by its December release date, Derek estimates he was putting in an average of 75 hours a week, while Donny eclipsed the 100-hour mark.

"Almost every shot in the movie had some kind of effect in it," Derek points out.

As for his favorite memory of the experience, he says, "It was amazing looking at all the incredible shots that would come through every day. And, obviously, it was pretty special to be working on a movie with my brother."

There and back again

Currently, Derek is back in Kansas, where he is putting together a show reel that he hopes to use to apply to Sony or Industrial Light & Magic. ("I've always had the dream of working on 'Star Wars,'" he says.)

Meanwhile, Donny started training this week at Sony Imageworks for his post-production role on "Spider-Man II," which will be released in July.

"I'm very happy to be a part of it," he says, "especially after competing with the first 'Spider-Man' at the Academy Awards for visual effects, and realizing that they have a great team here as well."

In a nifty bit of synchronicity, the trailer for the upcoming "Spider-Man" is making its debut before showings of "The Return of the King."

Although the Rausch brothers are planning to use the skills and experience learned in New Zealand to ready themselves for long careers in the motion picture industry, they realize that being a part of the "Rings" trilogy is a once-in-a-lifetime opportunity.

"I believe that after people see this final film that most will look back at this as one of the greatest trilogies," Donny says. "The scope and the heart that went into it seem unmatchable to me. I felt like I was in a family creating something that we would want to feel proud of for the rest of our lives. I think we did that."

Yes, the Rausch family certainly did.