The Mums craft new sound in absence of founding member 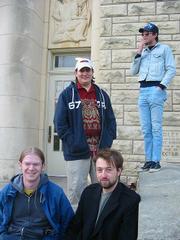 The genealogy of Lawrence jazz quartet The Mums follows a twisted path not unlike the capricious nature of a John Coltrane performance.

Originally a trio organized by jazz drummer Don Mumford, a veteran player whose resume included a stint with the Sun Ra Arkestra, the band took on a life of its own after Mumford skipped town this past spring, three days prior to a big gig at the Coleman Hawkins Neighborhood Festival in Topeka.

"We had the T-shirts made up and everything," recalls bassist Brad Maestas. "I ran into him at Johnny's Tavern and he was like, 'I got this gig in Atlanta,' and that's the last I heard from him."

Adopting the bands' M.I.A. founder as its namesake, the orphaned members -- Maestas, guitarist Charlie Rose and keyboardist Ben Singer -- regrouped with drummer Josh Adams and resumed their weekly gig on Sunday nights under the red lights of The Eighth Street Tap Room basement (the band has also performed at a handful of private affairs).

Once again a fixture at the bar, the four-piece attracts a small but devoted following of friends, musicians and casual drinkers.

"We've admittedly been pretty bad about promoting the thing," Rose says. "It's hard to justify going out on a Sunday night."

For those bold enough to invest in a Sunday night on the town, The Mums offer one of the most diverse jazz shows in Lawrence, sharpened by years of experience with a multiplicity of groups and styles. Whereas Mumford steered the band towards faithful renditions of old jazz standards, the new incarnation of the group favors songs by newer artists such as Keith Jarrett, Pat Metheny and Bill Frisell. The ensemble also throws in a few curveballs, such as Radiohead's "Exit Music for a Film" and Beck's "Guess I'm Doing Fine."

"What we play isn't always what you'd consider 'jazz,' you know?" Rose says, mimicking the 'da-doom-doom-doom' bass line that has become synonymous with the genre. "Jazz has been around for a long time, and it's gone through a lot of different changes. It's the same thing with rock 'n' roll. If you're like, 'Oh, I'm in a rock band,' do you mean 1950s rock? Do you mean '60s rock, '70s rock, '80s rock, '90s rock, indie rock? It's hard to put a one-syllable description on music that has lots of different facets."

The group members honed their chops in the Kansas University jazz program (where Adams, Maestas and Rose studied) as well as a number of local bands -- Maestas with groove band The Yards, Adams with the now-defunct Jose PH, Rose as the banjo player for bluegrass band Two Dollar Shoe Revival Story and Singer with Einstein Electric.

Though Singer contributes a few original tunes to the band's set, most of the material comes from an underground jazz bible known as "The Real Book."

"You can't just go into a music store and buy one because the whole thing was transcribed by some dude in Boston. He started making copies, and it just spread across the country, so none of it's copyrighted or anything," Rose says. "It's kind of a running joke that they're going to come in and raid all the jazz musicians and take away their Real Books."

The group practices on Sundays before onlookers arrive, lending a loose vibe to its performances.

Rose says the band is more a labor of love than an easy paycheck.

"Usually we make between 15 and 30 bucks apiece if it's a good night," Rose says. "But you know, it buys you lunch the next day, and I don't have anything else to do Sunday nights."