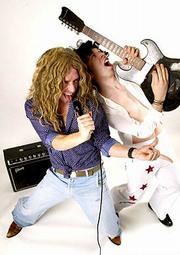 As Brodie Rush can testify, the third skill may be the most important.

"We did a show at Replay Lounge without telling anybody and we were just laughing to ourselves about how uncool it is to be playing Zeppelin songs all night," says Rush, who fronts the Kansas City prog-rock band Be/Non. "But then everybody liked it too much, you know? So unfortunately that made us think this is cool, and then we started figuring out we could make money."

Eight or so Zeppelin nights later, Rush and his ever-evolving Be/Non band (which now includes 25 members, past and present) have established a reputation for putting on stellar Zeppelin stage shows. With a catalog of 50-plus songs and a rotating cast of drummers and bassists, Rush and long time collaborator John Huff are firing up Zeppelin V (a humorous jest at the lack of a fifth self-titled Zeppelin album) for two pre-Christmas shows.

The shows will be Huff's first opportunity to concentrate on his Robert Plant impression and not have to play bass (Be/Non's Jeff Harshberger assumed that duty). "I'm singing like two octaves above where my voice goes," Huff says. "I'll have reverb and delay pedals so I can make everything go crazy where it's supposed to."

Rush's penchant for outlandish stage shows shouldn't surprise anyone who has seen the enigmatic performer at work. With Be/Non, Rush commands the stage like a bat out of hell, boosting his petite stature with Sabbath-sized metal riffs and larynx-challenging vocals. Be/Non's crooked take on rock is both beguiling and transcendent, emphasizing daredevil melody changes and meter-challenged rhythms.

As Zeppelin V prepares for its upcoming gigs, Rush took a moment to answer some questions about the band he most adores.

How did the Zeppelin tribute band start?

I used to live with Kliph (Scurlock, of Flaming Lips fame) and we'd always end up playing Zeppelin and be like, 'You know this one?!'" and suddenly I realized that all my years of getting guitar magazines had finally paid off. I had finally found somebody who wasn't another guitar player who could play everything note-for-note, even the little fuck-ups, perfectly.

Who is your favorite Zeppelin member and why?

I got to say Page really, because I play guitar. He's a craftsmen; sloppy as hell, but he was great at the texturing and layering and having a real iron grip on the vision of it all ... If there's any guy that you could say I'd be the closest to, it's that guy ... minus the drugs, but definitely the physique and guitar stance.

I gather you spent a large portion of your youth learning the Page licks...

I home-taught myself, and in lieu of actually doing legitimate schoolwork I'd sit in my room and play Zeppelin religiously and learn every little note because I figured if I could play that I could play anything. It was almost like having him be my tutor, to come over and teach me licks ... Plus, I didn't hang out with anybody when I was a kid, so I pretty much was like Phantom of the Opera and just stayed in my room and just woodshedded Zeppelin all day.

What do you think is the worst thing that ever happened for Zeppelin's career?

Drugs ... well, getting hooked on drugs and it not being a problem. In fact, I got a couple of these bootleg DVDs from 1977 and 1979. Those are eras they never let you see because they're so into drugs that the licks are gone.

Do you feel any affinity for the Zeppelin lifestyle?

Mostly, I'd like to make money at all with music, period ... I wouldn't change the lifestyle I have, but I would like to not have to worry if anybody's ever going to put out my records. It'd be nice to have a lot of those things -- castles and weird rituals and such -- but I'll save that for when I can afford to have those things.

Mostly stumbling into Blayney's some night or some bad KC blues jams. Any jam night, basically...

I would challenge any other Zeppelin cover band. I'd say that maybe minus a Rhodes (organ) and a gong, we'll definitely smoke your ass ... We do have the bow (for doing Page-esque guitar solos) ... I made my Grandma buy it about 11 years ago because I wanted to know how to do it. But I ended up getting the synthetic bow, so the horse hair is real slick ... So now it's just like somebody's tongue going over the strings, which isn't the desired effect. But it looks like it! Plus, everybody's drunk, so nobody knows anyways.

I see you putting yourself out there in a lot of unusual projects. What do you think your strength is as a performer?

I think the newest superpower is being able to take a crowd of people and wrangle them all down and make them laugh; make them hate me; make them cry. Just getting everybody, putting them on the train with me and going for a ride.