Signs of Life artist turns to Bible for inspiration

When Signs of Life gallery director James Schaefer was hanging Joan Bohlig's biblical etchings a few weeks ago, they at first seemed so visually quiet compared to the paintings around them.

Then the lyrics "Silent Night, Holy Night" came to mind, and he began to see the prints in a whole new light. 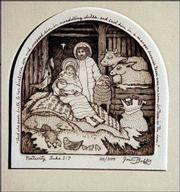 "It fits the thought of the nativity of Christ. There's all that great power kind of concentrated and humbled in an infant," he says. "When things are quiet and the noise stops and the visual silence kind of settles, sometimes you can appreciate those potent things that have a humble appearance."

Bohlig, who has a bachelor's degree in art education from the University of Wisconsin and a master's degree in ceramics from Alfred University in New York, turned to spiritually based art during a period of emptiness in her life. She was home taking care of her two sons and couldn't find a satisfying outlet for her creative impulses.

"I was looking for something unique. Before that, I was drawing trees and flowers and buildings and people, and it wasn't anything unique from what everybody else was drawing," says Bohlig, who lives in Eagan, Minn.

So she took some etching courses at a nearby university. She based her first design -- which she created on a 6-by-6-inch framework -- on Matthew 7:15-16: "Beware of false prophets who come to you in sheep's clothing, but within are ravenous wolves. You shall know them by their fruits. Are grapes gathered from thorns?"

That was in 1974, and she's been working on the series ever since. She's 67 years old and still works in her studio every day.

Christian art out of the closet

Bohlig grew up in an ardently Christian household, but her parents weren't so zealous that it turned off her and her four sisters, Bohlig says.

Still, it wasn't an easy decision to turn to Christian concepts and imagery in her artwork.

"It's very fashionable today, if you want to be in New York galleries, to make ugly things that scream at the viewers with slash-and-burn lines and technique. That is not what I want to do, and it's not what I want on my walls," she says. "I try to avoid sweet sentimentality"

"Museums and art galleries have been very reluctant to show this kind of work because in the early part of this century Christian art was so bad and sentimental," she adds.

The eight prints in Bohlig's "Christ's Birth" series are on display in the bookstore, and four additional etchings inspired by Bible verses are on view among works by other artists in the second-floor gallery. 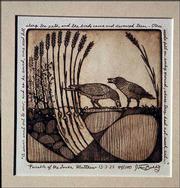 Etching began in the early 16th century in Europe and was popularized by Dutch artist Rembrandt. Bohlig creates hers by coating a copper plate with resist, letting it dry and then drawing into the surface. She then immerses the plate in acid, which eats into the exposed lines. She repeats this process several times, working from the widest to the finest lines.

To print from the plate, she cleans it, covers it with ink, works it into the etched lines and wipes away the excess. She runs it through a press and re-inks the plate for each successive impression.

It's an exceedingly time-consuming process but one Bohlig enjoys.

Her prints contain extraordinary detail, down to the tiniest individual lines of grasses and plants. The works are reminiscent of medieval woodcuts in their use of simple color, texture, line, pattern and lack of perspective. Bohlig also intends for the etchings to echo biblical writing, "particularly the wonderful poetic nature of the King James Bible, where you have a lot of parallel lines, repeats, reversals, echoes" through her use of pattern.

Each print -- there are 73 in the series -- is based on a Bible verse, which Bohlig carefully writes around the perimeter of the print once it dries.

"There are many opportunities to ruin this before you're done," she says.

Bohlig exhibits her work in church and Christian college galleries across the country, and they are part of public and private collections around the world.

"I think these pieces have given meaning to my life, and I think they do to others, too," she says. "It's a way for me to witness."