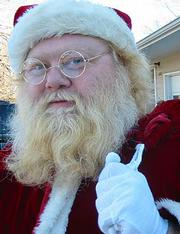 It's just days before Christmas and Santa's been spotted near Centennial Park.

Horns honk and children gawk at the jolly man in the plush red suit as he waves to passing cars. With his thick, pipe-stained beard and bulbous tummy, the street-side Santa looks like an archetypal St. Nick, built tough to withstand hordes of lap-sitting cherubs.

On this mild Thursday afternoon, Santa had planned on going downtown to pass out candy canes and business cards. But now he is tired, thanks in part to a hereditary heart condition, which also prevents him from holding a steady job. As he saunters back into his duplex, he passes his sleigh: a beat-up grey pickup truck stickered with slogans like: "It's the duty of every patriot to protect his country from his government."

Inside the duplex, Santa's bachelor pad is adorned with Frank Zappa and Grateful Dead posters. Four Christmas stockings hang from a bookshelf, three of which bear the names of Santa's cats: Elvis, Mojo and Shithead. The other one simply says "Harley-Davidson."

Santa strips off his coat, revealing a bulging pair of denim overalls and thick arms covered in tattoos (his back -- still hidden under a KC Chiefs T-shirt -- is plastered with pin-up-girl tats). On his lower left arm, a rainbow-colored symbol is visible: the Chinese character for hemp.

"If you look this picture and you know anything about smoking accessories, you know what Santa has in his left hand is a turn-of-the-century Opium pipe," he says. "That's part of why he's so jovial; because he's got a buzz."

Double take
To his closest friends and family, Santa is Chris Hartman -- a self-described "happy hippy biker" with boundless generosity. He's the kind of guy who would gladly get out of bed at 2:00 a.m. to deliver gas to stranded friends; who would surprise buddies by showing up at their bands' out-of-town gigs; or who would gladly offer strangers his last $20 or floor for the night. 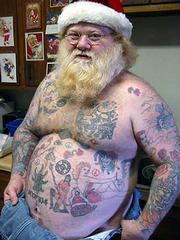 Hartman's brother Stan (who, at 39, is four years younger) said Chris doesn't prejudge anybody. "Normally you have your signs go up when you meet people, you know? He has none of that."

To thousands of pot smokers across the country, however, this Santa is Simon Worman, cannibis guru and author of "The Original Unofficial Joint Smoking Rules." Dubbed the "Emily Post of Pot" by High Times magazine, Hartman has sold more than 5,000 copies of his self-published book through mail order and independent retail (mostly at head shops).

The book's 75 rules of ganja-torching etiquette -- Example: "If you're in the middle and you have to keep passing the joint back and forth, you are allowed to double toke the joint." -- have become a sort of underground Bible for blunt blazers.

"I decided if Tommy Chong can make a living laughing at weed, why can't I?" Hartman says.

When talking about his book, Hartman's raspy, smoke-weary voice nearly buckles from overexertion. In between coughs and flem-clearing hacks, his chubby face lights up with excitement as he explains which corporations and which political figures are to blame for keeping marijuana illegal. He cites passages from Jack Herer's "The Emporer Wears No Clothes" -- a book dedicated to legalizing marijuana -- with the ease of a university scholar.

"He's an advocate," Stan Hartman says. "You laugh when you hear him talk because he makes light of it, but his message is very serious and it's very educated." 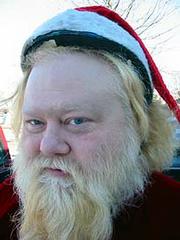 Magic show
The first time Hartman felt the magic of Santa Claus, he was doing 70 mph on a Florida interstate. Dressed in full Santa gear (including a red velvet Santa cap crafted from a road-legal helmet), Hartman and an elf-hatted friend were joyriding down the highway on their Harley motorcycles.

"This car went by us with like four or five kids in a station wagon and it was like a slow motion thing where the magic in each kid's face was almost eerie," Hartman says. "It was like a spiritual awakening."

"I went to the funeral, and when we got home there were Christmas presents under the tree from Mom," says Hartman, who lost touch with his father after his parents divorced when he was five. "The next few years, whenever Christmas would roll around, I'd get really sad."

So Hartman began playing Santa Claus as a way to bring happiness back to Christmas. He led a trail of motorcycles in a 'Toys for Tots' fundraiser organized by a Florida biker's association that he belonged to. He also began visiting the homes of friends at Christmas, surprising their children with personal visits.

In 1991, Hartman moved to Lawrence and brought his Santa suit with him. He continued his tradition of surprising friends' children, and even visited a retirement home one year.

"Once I started doing this it proved to me that there is a Santa Clause," he says. "It's the spirit that lives in all the guys who dress up as him."

By this time, Hartman had already discovered a second type of Christmas magic. During an impromptu Santa appearance at a Florida strip club, he began getting free lap dances (and then some). Thus, Hartman discovered an additional job perk -- chicks dig guys in Santa suits.

"The main reason I do it is for the children," Hartman says. "And then, after the kids go to bed, there's bigger girls who want to be on the naughty list."

Think fast
On a Friday afternoon a week before Christmas, Hartman is visiting a preschool that has hired him for a personal Santa appearance. In the school's playroom, he calmly fields questions from 12 starry-eyed children.

"Magic," Santa responds. "And if I give away the secret the magic doesn't work."

For the moment, this seems to satisfy the overzealous tot. But Santa's work is hardly done yet; he still has to explain why he can't give reindeer as gifts.

When Santa leaves, the screaming children tear open their gifts in an exuberant flurry. Their beaming faces and joyful outbursts indicate that Santa has done his job.

The teacher who hired Hartman is enamored with Santa's performance. But when asked about Hartman's book, he begins to feel uncomfortable. He expresses concern that being associated with Hartman in the media could cost him the respect of his school's parents -- or worse, his job.

So proud, in fact, that when he printed business cards for personal Santa appearances last year he had no problem putting his e-mail address -- 'jointman@aol.com' -- on the card. He got two gigs for $50 apiece, one of which skipped out on the bill.

Destiny's Child
The people who call on Hartman's services, however, do so for one reason only: the man plays a damn good Santa.

"I always wondered why Chris didn't really exploit the Santa thing 'cause he could be the best Santa out there," says Joe Comparato, whose four-year-old daughter Mia was visited by Hartman two years ago at Christmas. "He has more fun than the children do; I really believe that." 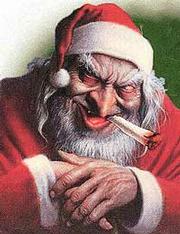 A Santa image from Worman's collection

Next year, Santa will take his first real crack at starting a workshop. Hartman says he is looking to acquire a woodworking set so he can craft small trucks and other trinkets for the children he visits.

"The more time goes on the more I realize that becoming Santa Claus isn't really a choice I made; it's my destiny," he says. "It's something that a greater will or spirit is pushing me toward. Maybe that's what I'm here on earth to do -- bring happiness at Christmas."

Don't expect Santa to steal the spotlight from Simon Worman, however. A DVD companion to "The Original Unofficial Joint Smoking Rules" is nearly complete and plans are in store for a second book titled "Breaking the Rules: A Collection of Lame Excuses."

One thing Worman says he is scaling back on, however, is actually smoking pot.

"As I get older, the more I smoke it the more it makes me tired."