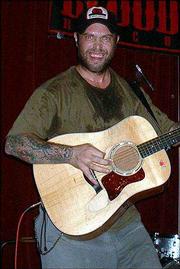 It's 11:59 p.m. on Dec. 31, your glass is topped off with champagne while you're intoxicated and tone-deaf companions prepare to offer you their slovenly rendition of "Auld Lang Syne."

How about leaving the musical portion of your year-end celebration to the professionals with a trip out this year?

That's right, local bars and organizations have booked a bevy of bands for your aural pleasure to ring, or rather rock, in the New Year.

With many options at some of the area's hottest venues, no one should have to say goodbye to 2003 without proper musical accompaniment.

Someone once said that good things come in threes. Now it seems they come in fours when these musically varied combos combine for an evening of entertainment.

Gourmet Mushroom X, the septet with a "checkered" history will perform its strident punk-inspired music for the holiday crowd.

Also on the menu at Liberty Hall is the multi-instrumental Chubby Smith. The veteran musician will take the stage with his quintet to perform their unique country/rock stew.

The Naildrivers (formerly Jeffrey Lee and the Pale Moon Kings) will mix it up with their own unique mix of jazz and blues infused with a cutting-edge rhythm section.

The final piece of the eclectic quartet is Living Roadkill who will add their mysterious sound to the evening's musical medley.

If rural music is your cup of tea, The Bottleneck is serving up some country with a twist. This second helping of rock-infused country bands will delight the rock-a-billy in everyone.

Sharing the bill with Rayfield is the country roots band Forty Twenty. Hailing from Lincoln, Neb., the quintet is no stranger to Lawrence. The honky-tonk-loving band performs its unique style of country music in the classic tradition to sold-out bars across the region.

For those who can't decide what kind of soundtrack would best suit their New Year's festivities, Lawrence's longest-running club, The Jazzhaus, will feature the Majestics Rhythm Revue. The six-man band performs numbers from its improvisational soul, jazz, funk and blues repertoire. Behind lead vocalist Courtney Smith, the sextet is known not only for its innovative music but terrific showmanship as well.

Arthur Dodge and the Horsefeathers

Sometimes the holidays are all about tradition. That is the case for Lawrence cult figure Arthur Dodge.

His popular local ensemble will once again entertain the patrons of the downtown mainstay at the end-of-year celebration. Influenced by a variety of musicians, the quintet plays original songs, most written by Dodge himself, in a bluesy, soulful style. With an upcoming album tentatively due in March, he should unveil a few new selections.

Maybe you would like a little wine and dinner with your song? How about all that while dancing the night away ... and making a difference in the world?

The Sun Club is hosting an evening of big band classics provided by Pretty Polly: Poly-crystalline Silicon Semi-conductors. Dinner and wine will also be served at the celebration. Proceeds from this evening-long extravaganza go toward solar energy development.

Also on the menu at the charitable event is guest speaker Eileen M. Smith, a Kansas University alumni and author of "ElectriCity: Beyond the Curve of Deregulation."

New Year's at Abe and Jake's

For smooth jazz and delicious dining, venture down to the river to popular Lawrence watering hole, Abe and Jake's Landing. The nightspot is offering a catered dinner from Maceli's to the tune of live jazz accompaniment. After 10 p.m., the musical responsibilities will be turned over to a DJ to spin you into 2004.

If your holiday plans are taking you east there are some events in the Kansas City area you won't want to miss:

The veteran alt-rock act will ring out the old with its hypnotic melodies and grindhouse guitar riffs.

Hailing from Texas, guitarist Chris Duarte has created a local fan following for the past decade. His combination of soulful blues and blistering rock puts him at a level beyond most other six-stringers.

This country crooning duo, who are REALLY brothers, hail from Tampa, Fla. Performing together since their early teens, the sibling act has toured nationally and released several CDs. Their country potpourri of songs is sure to please.

Also a member of this country music triumvirate is Broken Cowboys. The purveyors of self--described "feel good music" have shared the stage at Verizon Wireless Amphitheater with country music icons Alabama. The up and comers will perform their progressive rock-infused mix to the crowd.

Colt Prather rounds out the evening's entertainment with his fiddle playing. Already established on the Nashville music scene, the crooner puts a modern twist on classic country.

If your musical tastes call for a sampling of the Fab Four, wet your whistle with this Beatles cover band. The Westport natives perform magical mystery classics from the original mop-tops from Liverpool.