'Cold Mountain' is a powerful but chilly epic

Nicole Kidman and Jude Law star as lovers who desperately try to reunite during the Civil War in the big-screen adaptation of "Cold Mountain."

The Civil War-era "Cold Mountain" is the quintessential Oscar hopeful.

It contains everything a studio could ask for in a Best Picture contender: a lengthy, period epic with big stars, beautiful scenery, frilly costumes and lots of marching extras. It's based on a beloved novel by Charles Frazier that encompasses themes of profound love and brotherly warfare.

The film is the package deal, all right, and it tries hard to convince the viewer of its own artistic importance. Really hard.

But for all the powerful, eloquent moments -- and there are many -- "Cold Mountain" is hard to warm up to. Like the title itself, this is often one insurmountable, chilly affair.

Central to this is a love story between two archetypes who hardly know each other.

Beginning in 1861 in Cold Mountain, N.C., the prim preacher's daughter Ada (Nicole Kidman) and the buff outdoorsman Inman (Jude Law) share a brief flirtation before he ships off to fight for the Confederacy. As the months pass, each becomes aware of how much the relationship means to them. As one tragedy befalls another during the course of the war, their bond becomes the only thing worth living for.

While confined to a military hospital in Virginia, Inman's exposure to the horrors of close combat makes him go AWOL and embark on a quest to return home. Meanwhile, Ada has lost most of her fortune and is compelled to partner with an earthy (and mouthy) farmhand named Ruby (Renee Zellweger). Together they try and coax her property back into shape, even as local hooligans on the prowl for deserters turn the town into their own personal shooting gallery.

Will Inman and Ada's love hold out until they see each other again?

The answers are obvious to anyone who has read a Harlequin romance.

Law and Kidman are individually fine, even if it's a tossup as to who is prettier. They each have that rare combination of matinee idol looks and legitimate character acting chops. They have a tough time selling the "undying love" angle, though. Their scenes together are rather mechanical, given how much they're supposed to be consumed with affection.

The really great performances in "Cold Mountain" spring from the supporting roles that pepper the film.

Charles Frazier's acclaimed novel about profound love and brotherly warfare is turned into an Oscar hopeful. The central romance between Jude Law and Nicole Kidman is the least convincing part of this Civil War epic -- it's downright chilly. Yet the details of their respective journeys resonate greater than the film's "big moments."

As Inman takes on the task of Ulysses (not S. Grant, but the ancient Greek guy), he encounters one memorable character after another. From a philandering, bowel-challenged minister (Philip Seymour Hoffman) to a lonely Confederate widow (Natalie Portman) to an opportunistic backwoodsman (Giovanni Ribisi), each of these individuals has been tainted by the war and learned how to survive in their own way.

Throw in Brendan Gleeson as Ruby's no-good, fiddling father, Dame Eileen Atkins as a wise goat farmer and even White Stripes singer Jack White playing a runaway minstrel, and this may be the strongest cast of any project this year. It's certainly the most diverse.

Zellweger adds a feisty energy to the duller portion of the film. Regrettably, it's difficult to believe her character for a minute, despite the fact that the Texas native is about the only principal cast member who is actually from the South. (Most aren't even from America, for that matter.) 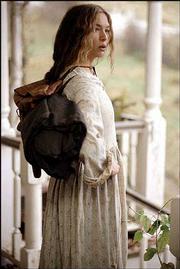 The Golden Globe nominee turns Ruby into the spunky gal who has a down-home quip for any occasion. She'd be right at home in "The Divine Secrets of the Ya-Ya Sisterhood," but her presence here is like inserting Calamity Jane into "The Red Badge of Courage."

What works best in "Cold Mountain" is how writer-director Anthony Minghella ("The English Patient") handles the details of the story. Despite staging such "big moments" as the opening Battle of Petersburg, it's the passing images that resonate most: the reflection of a dream-like vision in the bottom of a well; the stare from a goat that is about to be butchered by its obliged owner; a shared embrace with a pining widow.

The majority of these come during Inman's road trip, which is the most consistently entertaining stretch of the film.

"Cold Mountain" may strive to bombard the viewer with its Oscar-worthy pedigree. But, fortunately, the ratio of small, efficient moments outweighs the icy, grandiose ones. Minghella and his cast have no trouble scaling the little hills.