Most everyone who's called Lawrence home for any length of time knows the story of what happened here on Aug. 21, 1863.

Early that morning, William Quantrill and his band of armed ruffians swept through the city on horseback, leaving a wake of death and fiery destruction.

A lesser-known fact is what the people of Lawrence were doing the night before the raid.

While conducting research for their "150 Years of Lawrence, Kansas" calendar, members of the Lawrence Preservation Alliance discovered that many of the townspeople had spent the previous evening at the Lawrence City Band's first concert. It was "down by the bridge with everyone having a fine time listening to the music, visiting with neighbors and friends, laughter, singing, dancing ... a good time was had by all."

"Probably a lot of people were pretty tired and were sleeping pretty late" the next day, speculates alliance board member Pat Kehde, who gathered photographs and dates of interest for the calendar. "Maybe that accounts for some of the reason that people weren't more alert."

This and other slightly obscure historical tidbits occupy the pages of the alliance's 2004 calendar, which it created to help celebrate Lawrence's sesquicentennial. Accompanying the dates are equally obscure photographs -- images that reach beyond those most widely recognized as signature shots of Lawrence history.

Like a view captured inside The Blue Bucket Shop, where a handful of smartly dressed black patrons are enjoying drinks. Taken around 1950 by photographer Duke D'Ambra, the picture bears visual witness to the lingering Jim Crow segregation that necessitated separate black-owned businesses -- even in a city founded on abolitionist principles.

"The history of African-American business establishments is an area that has not been as researched as it could be. It's a fascinating period," says Lawrence historian Karl Gridley. "It's a difficult part of Lawrence's past, but I think it's going to have to be dealt with more and more."

Politicizing and socializing
Kehde and fellow alliance board member Carol Francis conducted the brunt of the research required to assemble the calendar. They spent four months -- from January to April -- sifting through documents and photographs at the Watkins Community Museum of History, the Spencer Research Library and the Kansas State Historical Society.

They weren't searching for specific photographs, just images they thought would be less familiar to a general audience. The final selections span 1854 -- with the original plat map of Lawrence -- to the present day -- with a group gathered around a Jayhawk on Parade in downtown Lawrence.

In between are monumental moments, such as Quantrill's Raid, student anti-war protests during the Vietnam era and the catastrophic 1951 flood; politically charged events like the razing of old Fraser Hall at Kansas University and the 1954 school bond parade; and social snapshots, such as '50s-era friends eating and dancing at the Dine-A-Mite and a car give-away in front of Crown Drug Co. in 1938.

Kehde and Francis consulted other alliance board members for help on which important events to include in the calendar text. Among them are Langston Hughes' birthday, the burnings of Hoch Auditorium and the Kansas Union, the first KU men's basketball game, the 1855 Territorial Legislature election in which Missouri voters stuffed Lawrence ballots and KU Dandelion Day, when KU dismissed classes in April 1941 for students to dig campus dandelions.

"Can you imagine what the KU students of today would do if classes were dismissed to dig dandelions?" says Barbara Worthington of Oozoo Design, which handled the layout for the calendar.

Down memory lane
Kehde discovered that many of the best photos were taken by a few major photographers who lived in Lawrence and made a point of recording the city's history. The one who shows up most frequently in the calendar is D'Ambra. 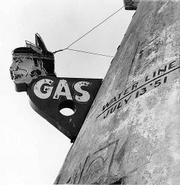 "He was a photographer in Lawrence even in my time," says Francis, who's lived in Lawrence since 1936, when she was in third grade. "He caught the flavor of things that were going on. ... He really did a great job of preserving our history."

For the most recent generations, images in the calendar will be a history lesson. But for people like Francis, many of the pictures stir fond memories of growing up in a town that's changed dramatically through the decades.

The calendar's cover carries an image of young men and women dancing at the Dine-A-Mite, an activity Francis herself used to savor.

"We had dances for sailors who were here, and a lot of the time they used students to be part of couples so the guys would have someone to dance with. It played a big part in our lives," she says of the restaurant that opened in 1939 at 23rd and Louisiana streets. "It was the only place to go. We were often too young to drink beer, but we did have the dance."

Gridley remembers the 1965 demolition of KU's venerable Fraser Hall, where his father, Roy, a literature professor, had an office. The calendar features a triad of images from the Topeka Capital-Journal that document the building's north tower meeting the wrecking ball.

The worn-though-beautiful building's demise -- juxtaposed with the survival of architectural gems like Dyche Hall, the Douglas County Courthouse and the Carnegie Library -- reveal changing attitudes about architecture, Gridley says.

"I think you really see how architecture was appreciated 100 years ago and how you really had beautiful buildings and beautiful craftsmanship, and that's something we really don't do today with the great public buildings," he says. "Fraser is an example of kind of a tragedy when you think about what replaced it."

'History lives with us'
The calendar, which the preservation alliance believes to be the first to focus specifically on Lawrence history, is sure to resurrect memories for some, spur questions for others and, at the very least, show just how much Lawrence has changed since a group of adventurous New Englanders set up camp here 150 years ago.

Everyone needs to be reminded of the historical events that shaped the community, says Lawrence historian and alliance board member Katie Armitage.

"It's part of our historical memory and part of the identity that we have with our home place. As a historian, I deal with these kind of markers and dates all the time, but I think most people are so very stimulated with the incredibly overstimulating world we live in that they don't really have a lot of space in their psyche for these kinds of things.

"The history lives with us, whether we know it or not. But I think to have that brought to our consciences is very important, particularly this next year when we're focusing on our very interesting heritage in what was a border state on the frontier that played such a major role in American history."