Pulitzer Prize winner works on another 'puzzle' of a novel

Metairie, La. — Shirley Ann Grau sips her gin and recalls the day four decades ago when bumbling Ku Klux Klansmen tried to burn a cross on her front lawn.

The men apparently forgot to bring a shovel and couldn't drive the cross into the ground. So it burned lying flat on Grau's yard -- not a terribly intimidating sight.

"It scorched a few feet of grass and it scared the neighbors, but I wasn't even here. I was at Martha's Vineyard. It all had kind of a Groucho Marx ending to it," she said.

The source of the Klansmen's wrath was Grau's 1964 novel "The Keepers of the House," a Pulitzer Prize winner reissued this year, which tells of a wealthy white man's 30-year love affair with a black housekeeper in rural Alabama.

Grau's work has long drawn criticism -- even threatening phone calls -- from those who object to the depiction of interracial romance and other touchy subjects. Others have complained about the white author's use of black characters.

"Why are these characters black?" a critic asked in a New York Times review of Grau's 1986 short story collection "Nine Women."

Grau coolly dismisses the complaints: "Logic is not the strong point of critics," she says.

At 74, she can afford to sip gin and ignore the critics. Along with the reissue of "Keepers," a new edition of her 1994 novel, "Roadwalkers," came out this year, as did "Selected Stories," a new hardcover collection of her short fiction.

She raised four children, has five grandchildren, wrote six novels and four short story collections, vacationed in Australia and east Africa and went whale-spotting off Baja California. She regularly visits two of her children in Houston, shops for clothes in Dallas, summers on Martha's Vineyard, and lives most of the year here, sailing and fishing on Lake Pontchartrain and writing fiction in a spacious modern home in one of the wealthiest neighborhoods of suburban New Orleans.

"I have been incredibly lucky," she says. 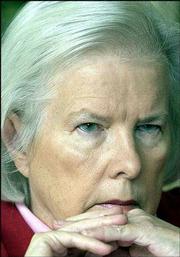 Writer Shirley Ann Grau, pictured during an interview at her home in Metairie, La., says she has little interest in what's said about her work. Grau, 74, won the 1965 Pulitzer Prize for literature for her novel "The Keepers of the House," which was reissued in 2003.

Grau was born in New Orleans and grew up in Mobile, Ala., the daughter of a physician. She recalls that as a 10-year-old avid reader, she wanted desperately to read Daniel Defoe's "The Journal of the Plague Year," but her grandfather forbid it and locked the book in his library. Her grandmother taught her to pick the lock.

She was fascinated as a child with Greek and Latin, but also loved roaming the woods and became a good shot with a rifle hunting rabbits, squirrels or anything else she could find.

"I got a .22 and instructions to shoot away from the house," she says.

Grau attended Tulane University's Newcomb College and pondered careers as a classics professor, musician or lawyer. She settled on writing instead, and her first book, "The Black Prince and Other Stories," was published in 1954, when she was 26. She won the Pulitzer with her fourth book and has published sporadically ever since.

Her fiction has all been set in the Deep South, from New Orleans to north Louisiana and Alabama. Critics who like her work usually point to the short stories for praise -- the author agrees -- and note her fluid prose, interest in race relations and a meticulous depiction of nature.

"The only unfortunate thing about Grau's stories is precisely that they are short -- each is a glimpse of landscapes both interior and exterior that ends too soon," said a recent brief New York Times review of "Collected Stories."

Grau has little interest in what's said about her work. She sneers and rolls her eyes at the phrase often used to describe her -- "Southern woman writer." She loathes the pigeonhole and dislikes the common comparison of her work to that of her fellow "Southern woman writer," Flannery O'Connor.

Many of Grau's stories deal with sudden, unexplained events and their aftermath. "The Hunter" tells of what happens to a woman who miraculously survives a small plane crash. "The Man Outdoors" is about what happens to a family when the father moves out, then disappears completely, after having a vision that's never explained.

Grau's mind is now fixed on a novel in progress, set in Kentucky in the 1880s. She speaks of the book as having a mind of its own -- "It's not behaving itself at all" -- but says it's about half finished, with some elements still missing.

"Any novel is like a puzzle. Pieces of it come from here and there, and then you wake up one day and they fit," she says.

She takes another sip of gin, strokes the cat she named Jihad and looks out at the lawn charred 40 years ago. The eyes remain calm, even as she recalls the threatening phone calls from people angry over the fictional interracial marriage she created.

Says Grau: "I always answer threats with threats. I remind the people that I'm probably a better shot than they are."