They made the stages and screens of the 20th century shine. Their music burned with the heat of love or plumbed the soul of the common man. Their writings took us to faraway worlds, or deep within our hearts.

Johnny Cash and June Carter Cash were country music royalty. Bob Hope made us laugh and warmed the hearts of lonely servicemen. Katharine Hepburn showed us elegance and pride in every role she played. Fred Rogers became a fatherly television friend to generations of youngsters.

Gregory Peck and Art Carney. Nina Simone and Maurice Gibb. Al Hirschfeld, Bill Mauldin, Elia Kazan and George Plimpton. They are some of the figures in the arts and popular culture who died in 2003.

Maurice Gibb, 53. With his brothers, he built the Bee Gees into a disco sensation with hits like "Stayin' Alive." Jan. 12.

Richard Crenna, 76. Emmy-winning character actor; the lovesick teen on "Our Miss Brooks," Luke on "The Real McCoys" and Sylvester Stallone's mentor in the "Rambo" films. Jan. 17.

Al Hirschfeld, 99. His caricatures captured performers from Chaplin to Seinfeld and immortalized his daughter, Nina. Jan. 20.

Bill Mauldin, 81. Pulitzer-winning cartoonist who depicted the weariness and frustration of GIs through his dogface characters, Willie and Joe. Jan. 22. 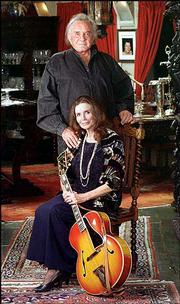 Country music legend Johnny Cash is shown with his wife, June Carter Cash, in their Hendersonville, Tenn., home in 1999. The deaths of Johnny and June Carter Cash came within months of each other this year.

Fred Rogers, 74. He invited millions of children to be his neighbor as longtime host of "Mister Rogers' Neighborhood." Feb. 27.

Michael Jeter, 50. The shrimpy assistant coach on "Evening Shade" and The Other Mr. Noodle on "Sesame Street." March 30.

Nina Simone, 70. Her deep, raspy, forceful voice made her a unique figure in jazz. April 21.

Robert Stack, 84. Actor whose granite-eyed stare spelled trouble for criminals in "The Untouchables" and "Unsolved Mysteries." May 14.

June Carter Cash, 73. Grammy-winning scion of one of country music's pioneering families and wife of Johnny Cash. May 15.

Gregory Peck, 87. He embodied citizenship and fatherly compassion in "To Kill a Mockingbird" and played real-life figures from Abraham Lincoln to Josef Mengele. June 12.

Katharine Hepburn, 96. She brought feminist strength, chiseled beauty and patrician bearing to such films as "The Philadelphia Story" and "The African Queen." June 29.

Compay Segundo, 95. Cuban musician who was nearing 90 when he soared to fame with the Buena Vista Social Club. July 13.

Bob Hope, 100. Master of the one-liner and favorite comedian of servicemen and presidents alike. July 27.

Gregory Hines, 57. The greatest tap dancer of his generation; acted in "White Nights" and "The Cotton Club." Aug. 9.

Leni Riefenstahl, 101. Legendary filmmaker reviled for documentaries she made about Hitler's Third Reich ("Triumph of the Will"). Sept. 8.

Gordon Jump, 71. The befuddled station manager on "WKRP in Cincinnati" and the lonely Maytag repairman. Sept. 22.

Donald O'Connor, 78. He performed the show-stopping "Make 'Em Laugh" number in the classic film "Singin' in the Rain." Sept. 27.

Elia Kazan, 94. Director whose triumphs included "Death of a Salesman" and "A Streetcar Named Desire" on Broadway and the Oscar-winning "On the Waterfront." Sept. 28.

Rod Roddy, 66. Announcer on "The Price is Right" whose booming voice invited lucky audience members to "Come on down!" Oct. 27.

Art Carney, 85. He turned "The Honeymooners" sidekick Ed Norton into one of the most memorable characters in TV history; won an Oscar for "Harry and Tonto." Nov. 9.