New York — Sadie and Bessie Delany were just girls when segregation forced them to sit in the back of a bus and drink water from "colored" ladles.

But from this racism, the sisters forged an exceptional determination. And from their father, a minister and ex-slave, they developed an unwavering social conscience.

Amy Hill Hearth tells their story for youngsters in her new book, "The Delany Sisters Reach High." The richly illustrated nonfiction children's book traces the sisters' childhood in the South during the Jim Crow era.

The sisters, who died in their 100s in the late 1990s, first shared their remarkable lives with the world in 1993 in "Having Our Say: The Delany Sisters' First 100 Years," a memoir co-authored with Hearth. The book inspired a Broadway play and a Peabody Award-winning television movie.

Many of the anecdotes from the original 299-page memoir are retold for children ages 6-12 in the 31-page "Reach High," published by Abingdon Press.

"I always thought the sisters' story would make a great story for children," Hearth says. "I'm only sorry they didn't live to see it."

The 44-year-old author says she has received numerous requests over the years from parents and educators to write a book for children about the sisters; the more detailed "Having Our Say" is already widely used as a high school and college text.

David Smith, who teaches fifth grade reading at the Finley Middle School in Glen Cove, N.Y., says the sisters' story is ideal for classes in history and life lessons.

"The Delany sisters handled adversity from a young age," he said. "That's an important lesson for young people to learn and embrace ... that being happy is not having a problem-free life but finding how to deal with adversity and finding support from those who care for you." 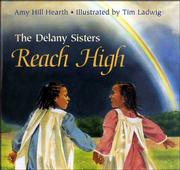 'THE DELANY SISTERS REACH HIGH' by Amy Hill Hearth recounts the stories from a memoir by Sadie and Bessie Delany, who both lived to 100. Many of their anecdotes are retold for children ages 6-12.

At a time when most blacks could scarcely expect to receive a high school diploma, the Delanys had some advantages. Their father became vice principal of St. Augustine's College in Raleigh, N.C., and America's first elected black Episcopal bishop. Their mother helped run the school while raising 10 children, all of whom went on to get college educations.

The sisters eventually moved to New York City, where Sadie became a public school domestic-science teacher and Bessie opened a dentist's office in Harlem. The sisters never married. In 1957, they broke another racial barrier by moving to a white suburban neighborhood, in Mount Vernon, N.Y.

"What comes through, although they were an elite family, is they were very socially conscious," Hearth said.

In the book, she describes how "Bessie and Sadie shared their desks and textbooks with former slaves ... who had not been allowed to learn to read and write."

The sisters, Smith added, "had the courage to step outside their comfort zone, to help those less fortune."

The book recounts numerous episodes in their young lives -- strongly defined by family, community, religion, education and discipline -- in a crisp narrative style.

"After breakfast, all of the Delany children lined up for Papa's inspection before they left the house," Hearth writes. "'Papa wanted to make sure we looked proper,' Sadie said."

But family life also was fun: "Sometimes in the evening ... the family got together in the living room for music. Every one of the children played an instrument and as a family they formed a band. ... In the morning people would walk past the house and say, 'Y'all had a party last night.' It wasn't a party, it was just the family having fun."

Unlike "Having Our Say" -- which described Bessie's near lynching -- "Reach High" omits the ugliest instances of racism the girls faced.

But Hearth does tell of the first time the girls -- 10 and 8 -- encountered Jim Crow. Bessie, the more fearless of the two, spotted signs for "white" and "colored" water ladles at the public well and drank from the "white" dipper.

"Sadie was scared Bessie would get in trouble, but she admired her little sister's courage," Hearth writes. "Several white people nearby looked angry, but Bessie didn't care."

The book's colorful illustrations by Tim Ladwig are faithful renditions of the events in the sisters' lives.

Ladwig worked closely with Hearth, poring over Delany family photos. To capture the skin tones and movements of the sisters, Ladwig used friends as models -- two young girls and their interracial parents -- for his drawings. The Delany sisters had a racially mixed heritage.

"I got period dresses and I would explain the scene and situation to them. Then I took some pictures and worked from the pictures," Ladwig said. For consistency, he used his friends' faces to represent the Delanys.

Hearth said she signed with Abingdon Press, the nation's oldest theological publisher, to honor the sisters' father. Profits from the book will go to the health care and pension funds for retired ministers and their widows.