Looking at the upcoming exhibition of John Talleur's artwork will be a bit like browsing the late printmaker's soul.

Many of the 30-plus works in the show were hand-selected from the walls of Talleur's Lawrence home and have never been seen outside that context. Talleur's daughter, Kansas University student Ann Talleur, and Andy Driscoll, a Baker University art professor and former student and assistant of Talleur's, chose the pieces because, as Ann put it, they were "a lot of stuff that seemed to be the way he was."

"He was such a wild, cantankerous guy," Driscoll said of his mentor. "He nurtured students. He gave to students."

Talleur taught at KU for more than 40 years before retiring in 1996. He pioneered the school's printmaking program. His students often recall his animated teaching style, which frequently had him screaming from desktops and jumping up and down. He was a tough critic, but his students learned to respect him.

"He upset me so much that I wasn't a student for a while," said Driscoll, who once took a hiatus from classes because he was so infuriated when Talleur kept telling him he could make his artwork better.

"I just thought he was nasty," Driscoll said while reminiscing recently in Talleur's home studio. "But he was right."

"But he was nasty," Ann Talleur countered, giggling.

"He was honest," Driscoll compromised.

A selection of Talleur prints, paintings, handprinted books, jewelry and other works will be on display Tuesday through March 7 at the Holt/Russell Gallery in Baker University's Parmenter Hall. The collection, which spans roughly 30 years beginning in the late 1960s, is aptly titled "Pish, Posh and Other Fooping Works by JT." 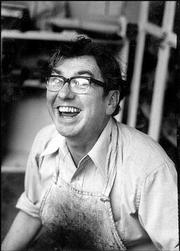 John Talleur, the late professor emeritus of art at Kansas University, smiles in this photograph taken more than 20 years ago. Work by the artist, best-known as a printmaker, will be on display at a Baker University gallery through March 7.

"Pish, posh, go cook a radish," is a line of gibberish Talleur used to spout off when he was fed up, his daughter said. Fooping is, of course, concealed cussing. Talleur often used that word and other cleverly veiled profanities because "You can't go on shore leave when you have a critique," Driscoll said.

Born in Chicago in 1925, Talleur received a bachelor's degree in fine arts from the School of the Art Institute of Chicago in 1947. In 1951, he earned a master's in fine arts from the University of Iowa, where he studied with Mauricio Lasansky. He received a Fulbright Fellowship in 1953 for study in France. Later that year, he joined the KU faculty.

His work has been exhibited widely in the Midwest. He also participated in group shows in Switzerland, Spain, France, England and Canada.

Several years before his death in 2001, Talleur donated six of his personal presses to the Lawrence Arts Center, where they now form the core of the center's first-ever printmaking studio. He also left his extensive collection of prints -- more than 160 -- to KU's Spencer Museum of Art.

"He was very generous," Driscoll said.

Once, when Driscoll sat in Talleur's house, lamenting that he couldn't afford the caliber of prints displayed there -- Goyas, Picassos, Durers -- Talleur grabbed a Durer and said, "Take this home. Live with it. Learn something for a change," Driscoll recalled.

Talleur often referred to daughter Ann as "the love of my life." Several of the pieces in the show were made especially for her.

Like the series of three pillows that will be perched on a set of pink-and-green upholstered chairs ("He had a pink-and-green phase," Ann said). The needlepoint pillows read, "Ann, Ann sat in a pan, thought she was a garbage man."

"Everything was played with. Everything was a reason for a good joke," Driscoll said. "I think it riled him when people didn't feel the same way."

"He was a very serious person who was just very alive and very happy to share what he loved with anyone willing to take part," Driscoll said. "I miss him."