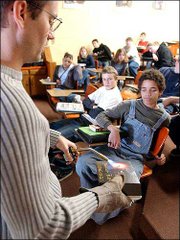 Tom Zerr, a teacher at Pittsburg Middle School, demonstrates to students just how much heat a space shuttle orbiter tile can take. Zerr, who traveled to NASA in 1995, is attempting to bridge the gap between unanswered questions and reality for about 180 students. Tuesday, students at the middle school questioned Zerr on a number of topics related to the shuttle crash, from how did Saturday's tragic event occur to what did the astronauts endure during the crash.