Year of blues kicks off

"Blues gets a bad rap because of what its called," said the 23-year-old, one of the blues' brightest new stars. "People associate blues with all the sad things that can possibly go wrong with their life. ... (but) the blues is what's happening."

Lovers of the genre are trying to spread that word in 2003, which has been declared "The Year of the Blues" by Congress. Director Martin Scorsese is producing a seven-part series for PBS to air this fall, and the Experience Music Project, a museum in Seattle, is sponsoring an education program and traveling exhibit.

The official kickoff of the yearlong celebration occurs Friday with the "Salute to the Blues" concert at Radio City Music Hall. Blues legends such as B.B. King and Ruth Brown will be feted by pop, rock and R&B stars including Aerosmith, Natalie Cole and India.Arie with collaborations designed to attract the nonblues listener.

"I think when people rediscover this music, they're going to say, 'Wow this is pretty contemporary,' so we're hopeful," said Alex Gibney, the event's producer. "People think of it as this downbeat music where people are singing these slow, sad songs, and it's really not that."

Negotiations are under way to broadcast the concert, directed by filmmaker Antoine Fuqua and executive-produced by Scorsese, on television or even make it into a theatrical movie release.

Concert proceeds are to benefit The Blues Music Foundation, which promotes the genre and assists needy musicians. Ticket prices range from $150 to $1,250. 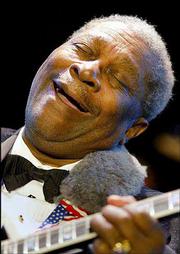 Legendary blues man B.B. King performs on the Stravinski hall stage during the Montreux Jazz Festival in Montreux, Switzerland, in this July 6, 2002, file photo. King, along with musical acts Aerosmith, India.Arie and Mos Def, will perform Friday at Radio City Music Hall in New York. The concert kicks off a yearlong celebration of the blues and is designed to raise the profile of the low-selling genre.