Energetic 'Chicago' is a musical triumph

Didn't see the stage version. Never cared for the tune "And All That Jazz." Not a huge fan of Broadway musicals.

Loved this big-screen adaptation of "Chicago."

If 2001's "Moulin Rouge" proved that modern audiences would support a large-scale musical, then "Chicago" confirms the genre has got legs -- lots of legs, actually. Many of them belonging to Renee Zellweger and Catherine Zeta-Jones, a tandem of 33-year-old actresses whose work in this film defines the term "range."

Zellweger stars as Roxie Hart, a mousy flapper who dreams of becoming a star -- a career choice put on hold when she is arrested for killing her lover after he refuses to help fulfill this objective. Roxie ends up a few cells down from her idol Velma Kelly (Zeta-Jones), a famed performer awaiting trial for her own crime of passion.

Both cases come to the attention of Billy Flynn (Richard Gere), a suave attorney who has a reputation for turning cold-blooded killers into sympathetic media darlings. As far as Roxie is concerned, this could be her big showbiz break.

Welcome to 1920s Chicago, where almost every individual survives by lies, betrayal and manipulation.

This $40 million blockbuster doesn't attempt to radically reinvent the musical genre like the Oscar-winning "Moulin Rouge," as much as deliver it with entertaining gusto. This is one of the year's most purely energetic pieces of cinema.

In fact, its only "slow spot" comes during the poignant solo "Mister Cellophane," delivered by John C. Reilly, who plays Roxie's guileless husband. Even then, witnessing this reliable dramatic/comedic actor strut his stuff as a song-and-dance man is a welcome surprise on its own. 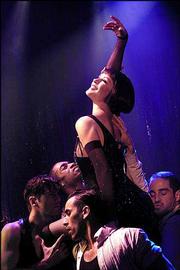 Special to the Journal-world

Catherine Zeta-Jones stars as a nightclub headliner in "Chicago."

(As a footnote, Reilly appeared in four features released in 2002 -- "Chicago," "Gangs of New York," "The Hours" and "The Good Girl" -- certainly the year's most impressive acting track record.)

Director Rob Marshall, a stage veteran whose previous film credit was helming the TV movie "Annie," masterfully uses all the bells and whistles at his disposal. From the staging to the costumes, the set design to the song arrangements, everything falls into place for the former choreographer. And by not permitting the visual elements to become too hyperstylized, he ensures they don't engulf the straight-forward drama.

The director even manages to make the mundane, beaten-to-death opus "And All That Jazz" worth watching.

Interestingly, the production numbers in "Chicago" are played out in terms of Roxie's fantasies. This device allows the songs to be viewed as more a reflection of her ambitions (and mental state) than something to be taken literally.

Two of the lesser-known songs actually come across as the picture's showstopping moments. The first is "Cell Block Tango," in which a sextet of female inmates recounts the specific event that led to their incarceration. Using a single word as a springboard, the women divulge how their relationships end in poisonings or shotgun blasts to the head, all culminating in a death-row mantra of "He had it comin.'"

The performers in this piece (including pop star and current Coke hawker Mya) ooze with ferocious attitude. It's about as sexy as a song about male-bashing can get.


The second is Gere's standout number, "We Both Reached for the Gun." Here, the canny lawyer literally plays the part of a puppeteer with the media attached to strings around his fingers. ("Comprehensible. Comprehensible/Not a bit reprehensible/It's so defensible!") By the song's end the press corps is echoing the title in rapid unison.

But there's something about the audacity of the pathos-tinged "Mister Cellophane" that puts the whole enterprise in perspective. Perhaps it's the sole moment where a viewer can slide back from the edge of his seat in order to realize, "I've been on the edge of my seat this whole time."