The many shades of jazz

"Jazz has been off the radar screen of today's young kids," Tom Alexios says. "Hip-hop and rap are everywhere. But here's this genre of music that kids weren't being introduced to until it was too late."

That's why the jazz aficionado has created "An Introduction to Jazz Workbook," a visual teaching tool designed to get children as fired up about Ellington as Eminem.

"It was a simplistic idea," Alexios explains. "Through an interactive workbook we would create word association with the typical jazz instruments and some of the select names who played those particular instruments: Count Basie and Duke Ellington for piano; Charlie Parker for saxophone; Dizzy Gillespie for trumpet, etc."

Armed with the concept, Alexios approached the Paseo Academy for the Fine and Performing Arts in Kansas City, Mo. Art director Mario Jordan fancied it enough to enlist his high school students in the design and completion of the project.

"He liked it because it had great self-esteem as being a real-world assignment for these graphic artists," Alexios says. "It's what they can expect when they go out and deal with a client."

Consequently, readers can grab a crayon and follow the character Webster, a young African-American dressed in baggy pants and a sideways baseball cap as he "takes you through the world of jazz music!" Each page introduces a new instrument and provides a handy description ("Did you know that congas are also called hand drums and have been played for hundreds of years all around the world?")

Interspersed are depictions of iconic jazz performers, all of which are colorable. Various puzzles (word searches, scrambles and connect-the-dots) add an interactive element to the proceedings as readers are asked to "fill in the beat." 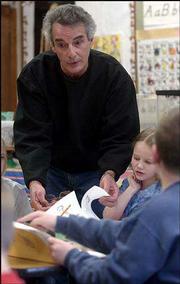 Tom Alexios has created a jazz coloring book/workbook that he is introducing into grade schools to get children interested in jazz. Alexios discusses the book with Brianne Myers, right, and her third grade class Wednesday at New York School.

"My favorite page in the book is the trumpet player," Alexios says of the portrait of the late Dizzy with cheeks at full puff.

The workbook is intended for kindergartners to third graders, but the rewards are often reaped by others.

"It's great that these older kids from an inner city school can help teach the younger kids from all over," he says.

Last Wednesday, Alexios took the workbook to a class of third graders at Lawrence's New York School, 936 N.Y. In order to make the images jump off the page he brought along the Free State Jazz Combo.

"The kids were blown away," Alexios says, describing the response to this group of high school seniors led by band director Tom Hunt. 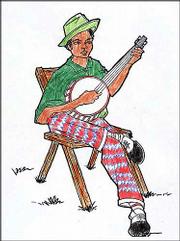 Second- and third-grade students at Sunflower School helped color these pages from "An Introduction to Jazz Workbook." The banjo player was done by Cody Jones.

The musicians demonstrated how various brass, woodwind and string instruments could be expressed individually then combined in jazz as a whole, while the 8-year-old audience members followed along in their workbooks.

"There's a certain degree of shyness or quietness when you get started," he says. "But then you see as the kids are scratching the surface it starts taking on a life of its own."

This is typical of the workbook programs Alexios has launched around the area. He's presented similar workshops at Sunflower School, 2521 Inverness Drive, as well as ones in KC and Topeka. Next he'll be instigating a single-page coloring contest for elementary schools in the area. Winners in each particular class will receive gift certificates from Hume Music, 711 W. 23rd St. 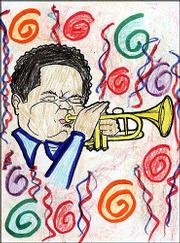 Second- and third-grade students at Sunflower School helped color these pages from "An Introduction to Jazz Workbook." The trumpeter was done by Lauren Byrn.

The project has also been exported to Wisconsin, North Carolina and New York.

Alexios himself is a 30-year veteran of Lawrence. ("I moved here during the hippie days," he says.) He runs all the music education outreach programs for the Duke Ellington family, and he maintains an ongoing connection with the veteran jazz magazine Downbeat.

"We have the blessing of the Kansas City Board of Education to continue the 'Jazz Workbook' as a series," he says. "This is not a one-shot wonder. We want to create a part two of it, and we're already designing our cover for a blues version."

He adds, "We've gotten phenomenal feedback from the young kids and the educators, and I'm getting great international attention for wanting to bring this concept into Canada and Japan." 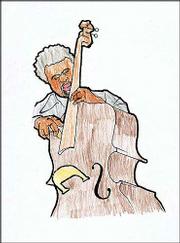 Second- and third-grade students at Sunflower School helped color these pages from "An Introduction to Jazz Workbook." The bassist was done by Rachel Kelly.