Los Angeles — Voters for the Razzies, an annual spoof of the Academy Awards, have a message for Britney Spears and Madonna: Don't quit your day jobs as pop divas.

"Star Wars: Episode II -- Attack of the Clones," also received seven nominations, among them worst picture and director for George Lucas, creator of the sci-fi saga.

The other worst-picture contenders are Eddie Murphy's sci-fi comedy "The Adventures of Pluto Nash" and Roberto Benigni's live-action version of "Pinocchio."

Nominees for the 23rd annual Razzies, organized by the Golden Raspberry Award Foundation, were announced Monday, a day before Oscar nominations. Razzie "winners" will be announced March 22, the eve of the Oscar ceremony.

Madonna personally had four nominations: Worst actress for "Swept Away," directed by her husband, Guy Ritchie (a nominee for worst director and worst screenplay); worst screen couple, paired with Adriano Giannini in "Swept Away"; worst supporting actress for the James Bond adventure "Die Another Day"; and worst song for the "Die Another Day" title tune, which she co-wrote.

What was so bad about "Swept Away," a remake of a 1975 Italian film about a rich snob stranded on an island with a handsome sailor?

"What wasn't?" said Razzies founder John Wilson. "It's a really awful remake of a highly regarded movie. I think it's the most blatant example of the fact that Madonna simply cannot act. It's as though she decided she's going to be a movie star and will keep inflicting these movies on us till we cry uncle. But this one may finally end her film career." 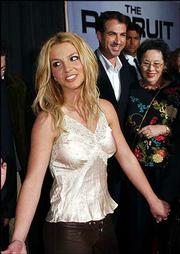 Britney Spears, above, joins Madonna, Angelina Jolie, Jennifer Lopez and Winona Ryder as a nominee for the "worst actress" Razzie, awarded by the Golden Raspberry Award Foundation, a spoof on the Academy Awards. Spears' critical flop, "Crossroads," leads the pack with eight Razzie nominations. Madonna's bomb "Swept Away" is close behind with seven.

Madonna previously received four worst-actress Razzies for such movies as "Shanghai Surprise" and "Who's That Girl?" The Razzies also named her worst actress of the 20th century.

"Britney Spears is a Madonna wannabe," Wilson said. "Madonna is on the outs, and Britney could be picking up the torch, or the spear, perhaps."

Besides Madonna and Spears, worst-actress nominees are Angelina Jolie for "Life or Something Like It"; Jennifer Lopez for "Enough" and "Maid in Manhattan"; and Winona Ryder for "Mr. Deeds."

Benigni was nominated in the actor, director and screenplay categories for "Pinocchio." Other worst-actor contenders are Giannini for "Swept Away"; Eddie Murphy for "Pluto Nash," "I Spy" and "Showtime"; Steven Seagal for "Half Past Dead"; and Adam Sandler for "Adam Sandler's 8 Crazy Nights" and "Mr. Deeds."