You can tiptoe through the tulips ... to the altar. Again.

Tiny Tim's famous, real-life wedding to Miss Vicki on "The Tonight Show" will be shown, along with clips of the fictional wedding that launched "The Brady Bunch," on "TV's Most Memorable Weddings." It airs at 7 p.m. Friday on NBC, Sunflower Broadband Channels 8 and 14, and is narrated by a recent TV bride -- Jane Leeves, who plays Daphne on "Frasier."

Since this is an NBC special, there is a heavy focus on NBC weddings, including the vows between Chandler (Matthew Perry) and Monica (Courteney Cox Arquette) on "Friends." There's also a clip of Daphne and Niles' wedding last September from "Frasier."

While the recent clips are interesting, "TV's Most Memorable Weddings" may be most intriguing for its look at older shows.

Of course, Luke and Laura of ABC's "General Hospital" are featured, and the special shows those armed rebels crashing Amanda Carrington's (Catherine Oxenberg) wedding on ABC's "Dynasty." Viewers didn't know who was killed in the cliffhanger, but the wedding seemed to kill the ratings. 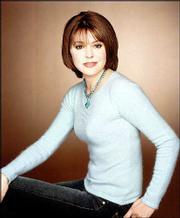 Jane Leeves stars on "TV's Most Memorable Weddings." It will air at 7 p.m. Friday on NBC, Sunflower Broadband Channels 8 and 14

No, it's better to keep everything sweet.

Larry Hagman is shown in his wedding scene as Maj. Tony Nelson on the NBC classic, "I Dream of Jeannie." Barbara Eden, who played Jeannie, and other stars recall their TV weddings in interviews accompanying the clips.

Meanwhile, Johnny Bravo teaches viewers everything NOT to do in finding true love, in "It's Valentine's Day, Johnny Bravo." It airs at 8 p.m. on Cartoon Network, Sunflower Broadband Channel 70.