Los Angeles — The characters may be yellow, but "The Simpsons" hasn't mellowed as it marks its 300th episode Sunday.

If anything, the Fox animated comedy born in 1989 is more boldly iconoclastic in the 21st century. Given that timidity is programmed into television's very DNA, how does "The Simpsons" thrive?

By being very good at being naughty, so much so that Fox simply can't afford to tinker with success. In its 14th season, the series can still field top 20 episodes and is the heart of a merchandising empire.

Fox just renewed the program for two more seasons, which will carry it at least through May 2005 and make it the longest-running sitcom ever (with "The Adventures of Ozzie & Harriet" set to fall to second).

The pattern of commerce trumping controversy was set early, when the show helped fledgling Fox establish itself as a brash alternative to the big three networks.

"There were many reasons the show was successful, one of which was we were in the right place at the right time," said series creator Matt Groening. "I don't think 'The Simpsons' could be on any other network, even today."

At the beginning, the clout of James L. Brooks smoothed the way. Brooks, a force in TV ("The Mary Tyler Moore Show," "Taxi") and movies ("Terms of Endearment") brought "The Simpsons" to Fox. Brooks, Groening and Al Jean have been the show's executive producers since its beginning.

The animated format also helped the series zoom below Fox's radar. The mustard-hued Simpsons, including dimwitted dad Homer, patient mom Marge, and children Bart, Lisa and Maggie, got away with cartoon murder. 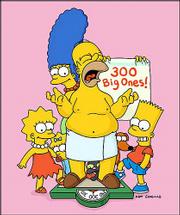 The 300th episode of "The Simpsons" will air Sunday on Fox. The cartoon family, created by Matt Groening, are, clockwise from center: Homer, Maggie, Lisa, Marge and Bart.

That unusual TV freedom has resulted in comedy and satire of often breathtaking proportions, especially since the show's creators and actors pride themselves on their democratic approach to targets.

"We go after everyone," said Yeardley Smith, who provides the voice of brainy Lisa. "Nobody's safe."

The series has mocked capitalism (through the evil empire of industrialist C. Montgomery Burns), entire cities (Rio de Janeiro threatened to sue over its depiction) and the news media (anchors may itch to sue over shallow Kent Brockman). "Welcome to Atlanta -- Home of Ted Turner's mood swings," a sign read in one episode.

"We haven't figured out a way to take on George W. Bush because he's such an obvious target," said Groening. In a previous episode, Bart accidentally shredded the memoirs of former President Bush, and the show has toyed with bringing the current president in to avenge dad.

"But the writers decided Homer and George W. would become really good friends. They're so much alike," said Groening, who delivers such zingers in the mildest of tones.

Religion doesn't get a pass. In last Sunday's episode, Homer won a personal injury lawsuit against the First Church of Springfield, was awarded the deed to the church and took up residence. Havoc ensued.

Among the eye-popping bits involving Christianity's most sacred symbols: An underwear-clad Homer grabs a cross for an air-guitar solo a la Tom Cruise in "Risky Business," and the chalice is turned into a cocktail cup, complete with tiny umbrella.

(The barbs cut across denominational lines. When the jury issued its million-dollar verdict for Homer, the stricken reverend exclaimed: "Your honor, we don't have that kind of money. We're not a synagogue!")

In the end, Homer provoked the wrath of God and was forced to repent. Faith prevailed again in "The Simpsons," which has been praised by some religious commentators for its realistic depiction of American devotion.