New York — When R. Kelly was arrested on child pornography charges last year, some wondered whether it would be a devastating blow to his career.

The answer, so far, is a resounding no.

Despite being arrested on additional child pornography charges last month, the Grammy-winning singer has written a No. 1 song for the teen boy band B2K and scored his own hit with the sexually charged "Ignition." The video for his song is one of the most requested on BET and has been on MTV, he's up for a Grammy, and his record label, Jive, is releasing the CD "Chocolate Factory" Tuesday.

"He's probably more popular now than during 'I Believe I Can Fly' (in 1996)," said Kedar Massenburg, president of Motown Records.

"R&B radio clearly has decided to rally around him," said Sean Ross, editor in chief of the trade publication Airplay Monitor, who said Kelly's musical gifts and track record as a hitmaker -- he has crafted hits for Michael Jackson, Celine Dion and other artists besides his own -- seemed to be an overriding factor.

Ross added that scandals were less likely to affect a celebrity's career. He noted that Jay-Z remained popular despite his conviction of wounding a man in a stabbing; when R&B singer Keke Wyatt was arrested for stabbing her husband, her songs still got radio play.

"In the '50s and '60s, you heard about careers being destroyed," Ross said. These days, it doesn't automatically happen. 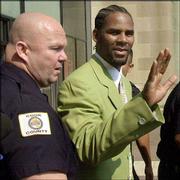 Despite two arrests on child pornography charges, singer R. Kelly's musical career is thriving. Since his most recent arrest last month, the Grammy-winning singer has written a No. 1 song for the teen boy band B2K and scored his own hit with the sexually charged "Ignition."

Plus, many of Kelly's fans don't believe the allegations and see them as another attempt to bring a successful black man down.

"I think part of it is a total distrust that a lot of people in the African-American community have of the media and the criminal justice system," said Chicago Sun-Times columnist Mary Mitchell.

In February 2002, the Chicago Sun-Times reported that it had received a tape that purportedly showed Kelly having sex with a 13-year-old girl. The newspaper passed it along to Chicago police.

In June, he was charged in Chicago with 21 counts of child pornography. Kelly has maintained his innocence in the case. He faces a maximum of 15 years in prison.

In the months following the scandal artists such as Jay-Z distanced themselves from Kelly, but support for the singer in the industry seems to have rebounded.

"I do think that he's an immensely talented artist," Mitchell said. "He has a beautiful voice, he has an uncanny way of putting lyrics together, so definitely his music has something to do with it."