'Cabaret' on its way

One of the steamiest and most critically acclaimed Broadway revivals is on its way to Lawrence.

"Cabaret" will hit the Lied Center stage at 7:30 p.m. Wednesday.

The Kander and Ebb musical is set in the tumultuous city of Berlin, just before Hitler's rise to power, and focuses on the legendary Kit Kat Club. The action revolves around cabaret performer Salley Bowles (played by Liza Minelli in Bob Fosse's popular 1972 film version) and her brief affair with an American writer, Clifford Bradshaw, who befriends her after she is kicked out of the club. Sally and Clifford fall deeply in love, but their relationship is jeopardized by chaos in the world.

Also figuring prominently in the story is the tragic relationship between FrÃ¤ulein Schneider, a German woman, and her Jewish suitor, Herr Schultz. 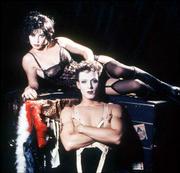 cast members from the touring revival of "Cabaret" will perform at 7:30 p.m. Wednesday at the Lied Center.

The show was revived at the Imperial Theatre on Oct. 22, 1987, with Grey reprising his original role. The reinvention, co-directed by Sam Mendes (Academy Award winner for "American Beauty") and Rob Marshall, won four 1998 Tony Awards, including best revival.