They ruled Lawrence, Kansas and the Midwest much the same way Bruce Springsteen dominated in New Jersey.

"They were huge," said Steve Wilson, manager at Kief's Audio and Video, who, as a teenager, remembers sneaking in the back doors of clubs to hear Finnigan's "tremendous voice" and his soulful Hammond B3 playing.

"The Serfs were a band that, back then, somehow transcended the gulf between the hippie kids and the fraternity kids," he said. "The Serfs drew in everybody -- they were so good, everybody came to hear them."

The Serfs are no more. But keyboardist Finnigan has made quite a name for himself.

Finnigan and the Phantom Blues Band -- better known as musician Taj Mahal's backup group -- will be at the Grand Emporium on Tuesday and at Liberty Hall on Wednesday. They'll also be in Wichita on Feb. 28 and Hutchinson on March 1.

Finnigan, a fixture in Etta James' band and in Crosby, Stills and Nash, joined Phantom Blues Band about three years ago.

"I just happened to be in New York and their (organ player) got sick or something, and they asked if I could come to Boston for a gig," Finnigan said during a recent telephone interview from his hotel room in New York, where he was playing with Crosby, Stills and Nash. 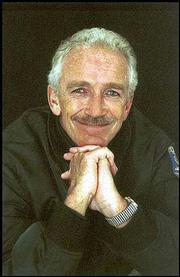 Keyboardist Mike Finnigan returns for a performance in his former hometown on Wednesday.

Since then, Finnigan said he's been to Europe and Japan twice, backing Mahal.

The ensemble, a collection of well-traveled players -- most notably guitarist Johnny Lee Schell, who backed Bonnie Raitt for many years, and guitarist Denny Freeman, patriarch of the Dallas blues scene that produced Jimmie and Stevie Ray Vaughan -- won a Grammy in 2001 for Best Contemporary Blues Album.

"It's amazing how much all of our backgrounds parallel each other," Finnigan said, referring to his bandmates. "It's like we all went to different high schools together."

Finnigan is up for a Grammy again this year for Etta James' latest CD, "Burning Down the House: Live at the House of Blues."

He also plays on Tracy Chapman's "Telling Stories," and on a Jane's Addiction CD that's due out this summer.

If you happen to catch the Pampers TV commercial for a new line of baby bibs, Finnigan is singing an old Cab Calloway tune, "Everybody Eats When They Come to My House."

Proud to be a Jayhawk

Originally from Ohio, Finnigan came to Kansas University in 1963 on a basketball scholarship, which lasted about a year and a half.


"I look back on it now and, you know, I just love KU," Finnigan said. "If it wasn't for KU, a bunch of us wouldn't have put a little band together and I wouldn't have been in a position to spend the next 30 years following my bliss."

He still follows the Jayhawks.

"Oh, my God, yes!" he said, laughing. "I live and die with KU basketball -- whenever there's a game on TV, that's when my wife says, 'You've got to quit talking to the television.'"

After leaving Lawrence for the green pastures of Los Angeles, Finnigan had a regional hit, "Captain Bobby Stout (Done Found Me Out)," with Jerry Hahn Brotherhood; happened to be in the right place at the right time for appearing on two cuts on Jimi Hendrix's "Electric Ladyland" album; and with guitarist Jerry Wood in 1972 recorded "Crazed Hipsters," which became an underground classic.

"He's passed," he said. "I can't remember how long ago it was -- 1996 maybe -- but, yeah, he was one of those guys who never set out to be a drug casualty. But once he got into the lifestyle, he couldn't get out. It's unfortunate."

Finnigan recorded a pair of solo albums in the late 1970s. Since then, he's preferred session and backup roles.

"I've had a lot of offers to do another (solo recording), but to tell the truth, I haven't had the time to sit down and do the record I'd like to do because in this business time is money," he said.

"Both of my kids have been in private schools for like the past 12 years -- I've had $50,000 in education bills every year. So the decision has always been: Do I want to remain gainfully employed? Or do I want to take some time off and see about putting a CD together?

That may change, however. Finnigan said his daughter, Bridget, who spent two years at KU, and son, Kelly, are both out of school, and the Phantom Blues Band recently cut a 13-track CD.