What if the South had won? 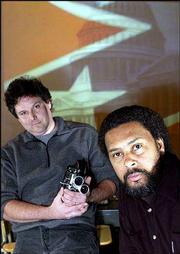 Lawrence-based director Kevin Willmott, right, and cinematographer Matt Jacobson, both assistant professors in theatre and film at KU, have completed "C.S.A. -- The Confederate States of America." The movie is a mock documentary of what might have happened to America if the South had won the Civil War.

"Slavery is the deep, dark family secret in America," says writer-director Kevin Willmott. "We all participated in it; we all evolved from it in some way or another, so we don't like to speak about it. The movie hopes to break that open to where we can say, 'Hey, we can actually talk about this. Slavery WAS a reality.'"

Willmott's "C.S.A. -- The Confederate States of America" envisions that reality through rewriting the outcome of the Civil War, from the South's "victory" at Gettysburg all the way to slavery-permitted modern times.

But this is no clinical exercise. "C.S.A." happens to be a hilarious, biting satire full of jaw-dropping moments involving recreated historical scenes, fabricated TV commercials and staged media events.

Try to picture Ken Burns' "The Civil War" injected with the socio-political edge of "Dr. Strangelove" and cinematically feigned like "This Is Spinal Tap."

The Lawrence-based director was influenced by Burns' Emmy-winning opus, especially with one throwaway detail.

"In that documentary he talks about the 'tropical empire,'" Willmott recalls. "That was the South's plan if they had won. When I saw that I went, 'Wow! They had an actual plan.' So I used that as a blueprint -- I didn't make that up."

"C.S.A." makes its official premiere at 8 tonight at Liberty Hall as part of the Langston Hughes February Festival.

"This film is bigger than the genre of faux documentary," he says. "It's how we found our way into this story. If I had to create a whole new universe of the Confederacy today, it would have been very difficult. But picking and choosing what I show through a documentary gives me that ability."

Persuading the community
Willmott, a Kansas University assistant professor in theatre and film, wrote the first draft of "C.S.A." in 1997 while still working on his previous picture "Ninth Street," a drama that starred Isaac Hayes and Martin Sheen. Armed with that early version of the script, he received a $10,000 grant from the National Black Program Consortium.

"That made it real for me," he says of the PBS-affiliated grant. "I was like, 'I've got to do it now; they gave me some money.'"

Utilizing all his resources at Oldfather Studio -- where professors are encouraged to undertake production of projects as part of their tenure track -- Willmott recruited help from students, faculty and others in the Lawrence community. (This reporter contributed a walk-on as host of a reality TV show called "The Pink List.") The filmmaker also drew from a repertory collection of Kansas City-based actors that he frequently directs in theatrical plays.

Between cast and crew, Willmott estimated about 300 individuals were involved in "C.S.A."

"Kevin has been the best possible director to work with," says cinematographer Matt Jacobson, who is also a KU assistant professor in theatre and film. "He's able to bring together all of these people and get them to commit time, effort and money. The actors and the crew were working for nothing or next to nothing because they believed in the project -- a lot of that's due to Kevin." 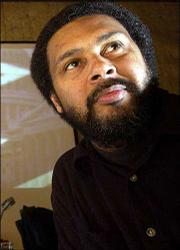 Lawrence-based Kevin Willmott is premiering his new film "C.S.A. -- The Confederate States of America" as part of the Langston Hughes February Festival.

About 99 percent of "C.S.A." was filmed in Kansas, with a few scenes staged in Kansas City, Mo. The total cost of the digitally shot movie was around $30,000. ("For most independent films that's a catering budget," the director jokes.)

"There are so many things that we're really proud of," says Willmott. "Matt Jacobson is very responsible for the success of the film, in terms of the look. We were able to capture so many different kinds of movies. We do a Hollywood film: 'The Jefferson Davis Story.' We do 'The Dark Jungle' as a war film. 'The Hunt for Dishonest Abe' is a recreation of a D.W. Griffith film." (This footage is particularly convincing thanks to Jacobson's use of a hand-cranked camera and iris effects laid directly onto the negative.)

"All of those are really 'look-driven.' For us, capturing the reality is what sells it."

Making the audience squirm
One aspect that may work against "selling" the 1 hour and 40-minute film is its controversial central subject. Recent movies that have dealt with slavery ("Beloved," "Amistad" and even the locally shot "Ride With the Devil") fared poorly at the box office.

Using the topic for an in-your-face satire is even riskier.

"One or two people have walked out," recalls the 44-year-old filmmaker of some advance-screening reactions. "That's really minimal considering what we're doing and some of the feelings that are attached to it."

Why would people respond that way?

"Believe it or not, they probably don't want to think that the Confederacy had slaves," he replies. "There are a lot of people right now who want to hold onto their Confederate heritage, but that heritage is somehow divorced from slavery. The movie puts slavery as the centerpiece. Finally we're going to discuss the Civil War as if slavery mattered. So those people are going to probably feel a little uncomfortable."

Adds Jacobson, "Nobody talks about why society is the way it got today. When people walk out of this movie -- hopefully after the film is over, not halfway through -- I hope that they're going to start talking about an issue that we've raised."

"C.S.A." deals with these issues through its shrewd manipulation of the truth. In real-life history, Confederate president Jefferson Davis purportedly tried to avoid capture by fleeing south dressed as a woman. In Willmott's vision, Union leader Abraham Lincoln is captured en route to Canada disguised in blackface.

Other memorable moments include a look at a Home Shopping Network-type program that specializes in marketing slaves. It's hosted by two chipper white women trying to peddle a black couple and their cute "litter of pickaninnies." And there's a painfully funny commercial for The Shackle -- a device similar to the vehicular LoJack but used for tracking slaves. ("Made of a lightweight aluminum alloy so it won't weigh your Tom down. Perfect for children!")

"We think we've got a feature film," says Willmott, who received an undergraduate degree from Marymount College in Salina and a master's from NYU's film school. "Obviously, we need the support of a courageous distributor. Our game plan is to go overseas first and hopefully get the buzz going there. 'Bowling for Columbine' is kind of our prototype in that respect."

Tonight's premiere also will serve as a benefit for Michael Broadfoot. All proceeds will go to the Lawrence man's medical expenses for acquiring a liver transplant. Broadfoot also appears in "C.S.A." as a character Willmott dubs "the rock and roll racist."

Tickets are $7, and there will be a Q and A session with cast and crew following the screening.

"In many ways I realized the South DID win the Civil War," Willmott explains.

"They lost on the battlefield, but they won the fight for ideology. The best example is Lawrence -- a town founded on abolition -- but then they start segregating. It's not the MISSISSIPPI Board of Education case, it's the TOPEKA Board of Education case. So the free state becomes a semi-slave state. How the heck did that happen?"