Film festival to return to N.Y. for second year

New York — The film festival that gave downtown an economic and psychological boost last year after the World Trade Center attack will return in May, organizers announced Thursday.

The Tribeca Film Festival, scheduled for May 3-11, will feature 200 premieres and offer more awards than last year's event, which took place eight months after the Sept. 11, 2001, terror attack.

The festival, which included a music and comedy concert, was organized by actor Robert DeNiro and others. DeNiro and actor Kevin Spacey appeared at a news conference at City Hall to announce the festival's return.

"Last year's festival was a dream come true," said DeNiro, who co-founded the Tribeca Film Center in 1988. "It brought thousands of filmmakers and film lovers to the area from all over the world, which was precisely what lower Manhattan and our city's economy needed post-Sept. 11." 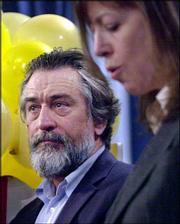 "The festival provided a huge boost to the local economy and sent the message that New York City was open for business and was once again a top tourist destination," Bloomberg said. "It helped stores. It helped restaurants. It created an excitement, and it created jobs."

A list of films for the 2003 festival won't be announced until April, but executive director Peter Scarlet said the event would offer a series of films to mark the 25th anniversary of the Black Filmmaker Foundation, as well as a series on movies about music.

Last year's festival, which featured 100 films, included the premieres of "Star Wars: Episode II -- Attack of the Clones" and "About a Boy," starring Hugh Grant and Toni Collette.

Several films by first-time directors were picked up for distribution, including "Roger Dodger," "Standing in the Shadows of Motown" and "Interview with the Assassin."