"While the din and clamor of yesterday's revolutions have faded, (Robert) Schumann's own battles remain as alive, perplexing and elusive as ever."


Even in his youth, Tibbetts heard something magnetic in the music of 19th-century German composer and pianist Robert Schumann. On his 16th birthday, Tibbetts' parents gave him a biography of Schumann for which he'd been lobbying for months.

"I'd been hearing his music, and it was one of those weird connections I think we all have with writers, painters, composers, where we spend the rest of our lives wondering why did this connect with me," Tibbetts says.

"I think what I was relating to in those years was what constitutes the best of Schumann's music -- an inquiry, a search, an admission that we contain within ourselves many selves. All that is in his music: a side that is uncertain and introspective, sometimes brooding, contrasted with another side that's very dashing and rebellious, iconoclastic, assured."

For several decades, Schumann worked within those contradictions, crafting music and criticism that placed him in the forefront of the Romantic movement. But he struggled with mental illness and died in an asylum in 1856 at the age of 46.

Portions of the composer's life seem to come straight out of a Hollywood movie, Tibbetts says. In fact, a few movies have told versions of Schumann's story. Now Tibbetts has created a 13-part musical documentary, "Robert Schumann and the Age of Romanticism," for broadcast on Kansas Public Radio. The hour-long episodes will be broadcast from 8 p.m. to 9 p.m. Mondays beginning March 3.

The series includes dramatic re-enactments and musical performances, as well as interviews with some of the foremost Schumann biographers, historians and critics.

The series takes listeners from Schumann's birth in 1810 through his boyhood in the aftermath of the Napoleonic Wars and his career in Leipzig, Dresden and Duesseldorf, Germany, in the 1840s and 1850s. It continues with the arrival of his protege, Johannes Brahms, in 1853 and concludes with his death in 1856 and the death of his widow, Clara, in 1896. A historical "footnote" brings the series into the 20th century and includes discussion of Hollywood film biographies of the composer. 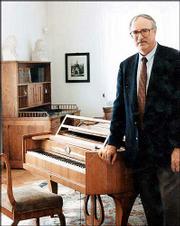 John Tibbetts, Kansas University associate professor of theatre and film, stands next to the piano at 19th-century composer Robert Schumann's boyhood home in Zwickau, Germany, in this 1994 photograph. Tibbetts, who has been fascinated with Schumann since his youth, has created a 13-part series about the composer's life that will air on Kansas Public Radio beginning March 3.

One show in the series, "Florestan and Eusebius," focuses on the divided self that Schumann located within himself and inserted into his music and writing. He dubbed the dashing, rebellious side Florestan, and the introspective, brooding side Eusebius.

"You'll often find that his music and his writing consists of dialogue between these two contrasting personalities," Tibbetts says. "He was conducting a psychological inquiry into himself. He was role playing long before the term got parlance in psychological circles."

To top it off, Tibbetts says, Schumann constructed a third personality named Raro to serve as mediator between the two contrasting personas.

"As long as there was a third-person arbiter between the two wildly careening opposites, Schumann kept himself together," Tibbetts says. "Later in life, Master Raro disappears. We see no more references to him or her, and that's when he goes mad. He loses the ability to contain his diverging selves."

So in 1854, Schumann attempted suicide by flinging himself into the Rhine River. He continued to work in the asylum and interestingly, Tibbetts says, "In Schumann's most seemingly disturbed moments, what little music there is, is very calm and serene. His handwriting is very legible for a change."

During his travels to conduct research, which he began in earnest in 1985, Tibbetts visited the institution in Endenich, Germany, looked out the same window the composer would have when he worked. He also visited Schumann's boyhood home in Zwickau.

He became even more fascinated with Schumann's thoroughly modern relationship with his wife, Clara Wieck, a well-known concert pianist in her own right.

"She's certainly the most important woman musician of the 19th century, and you can talk about her as an inspiration for Robert, which is fine, I guess, but it goes so much deeper than that because she also was a very strong person who kept things together," Tibbetts says, noting that she was much better known than her husband during their lifetimes and that Schumann often played the role of househusband while Clara traveled, playing piano concerts. "He depended upon her much more than she depended upon him."

Though Tibbetts -- a professor, broadcaster, author, artist and pianist -- has been fascinated with Schumann since boyhood and has studied his life extensively, he hopes the series will appeal to a wide audience.

"This is a guy who's very approachable. He's not some monumental presence like a Bach, or a Beethoven or a Mozart. He has flaws. He is fallible. He has his frustrations, his uncertainties," Tibbetts says. "Yeah, he's a genius. But I think it's a genius that he found as much through hard work as inspiration."