Baldwin — Artist Henri Doner-Hedrick has a "thing about color."

It floods her paintings and pervades her thoughts. It's inescapably etched on her face, brown with Filipino heritage handed down from her father, who died when she was 4 years old.

But Doner-Hedrick, raised by her white mother and stepfather, never thought of herself as different than any white child in her country school near Manhattan until they started asking why her skin was darker than theirs.

Since then, she's been grappling with issues of identity and cultural solidarity. Her thoughts pour onto canvases in works like "Is That All You See When You Look at Me?" and "Comin' and Goin' ... Until You Paint Me Blue," which are hanging in a solo exhibition this month at Art Affair in Baldwin.

"I believe I have something to say," Doner-Hedrick says. "Sometimes it scares me because I wonder if I'm saying too much or if I'm offending people. Instead of being so direct, I like to be subtle about how I say it."

Whatever her intentions when she created the work, however, it quickly became obvious during the show's opening earlier this month that viewers' reactions were colored by their own experiences.

Doner-Hedrick, a second-generation, multiracial Filipina-American artist who works out of her home studio near Lake Dabinawa, has dedicated the show, "Mixed Blessings," to all minorities.

It features three distinct series of paintings. In Fourteen Stations, the "Stations of the Cross" illustrate the idea of the crucifixion of the Filipino laborers and what they might have experienced during the 1930s and '40s. Though her mom didn't talk about her father after he died, Doner-Hedrick has discovered through research that he worked up and down the West Coast in canneries, then in the fields of white farmers until he died a pauper.

Looking into her father's life has taught Doner-Hedrick a lot about herself. 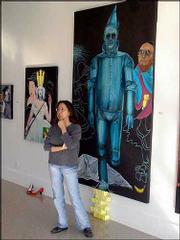 McLouth artist Henri Doner-Hedrick discusses her work while standing in front of one of her paintings, "Comin' and Goin' ... Until You Paint Me Blue." The Filipina-American artist, who studied with Kansas University art professor and painter Roger Shimomura, explores color, identity and social mores in her work. A collection of her work is hanging through Friday in an exhibition called "Mixed Blessings" at Art Affair, 622 High St., Baldwin.

"I didn't get to be raised with an Asian heritage, so I had to be white whether I liked it or not," she says. "There was always that part of me that was lost. For me, there was always a void. Now I don't have that need to search like I did before."

In another series of paintings, Doner-Hedrick combines Asian faces with popular American iconography from the movie "The Wizard of Oz" to explore what it's like to be Asian in a world of white imagery.

A third group of paintings focuses on Doner-Hedrick's relationship with her nearly 90-year-old mother who has Alzheimer's disease and lives in a nursing home. She paints the portraits of her mother based on photographs she takes when she visits.

"I like to go see the progression of how she's dealing with life," she says of her mother, who taught her to paint when she was a little girl. "I wish I knew what was in her mind now."

Doner-Hedrick has a bachelor of fine arts from Kansas University, where she studied with Roger Shimomura, a painter whose influence comes through in her work. (Shimomura even appears in a few of her paintings.) She teaches art at Washburn University and the Kansas City Art Institute. Her paintings have hung in solo and group shows throughout the Midwest.

Though she's been painting since childhood, Doner-Hedrick, 50, didn't begin to incorporate her thoughts about race and identity until the late 1990s while attending graduate school at Kansas State University.

Before that, she had painted portraits and landscapes and was becoming a bit depressed.


"I'm finding myself through my work," she says. "I'd love to see my work in 20 years. If I'm just now discovering what makes me stay alive on the inside," imagine what I'll be doing then.

She refers to her work as "unfinished reality," explaining that her creative process is a psychological journey through her past and present. She hopes her paintings engage viewers and inspire discussion.

"Talking about it completes the unfinished reality," she says.