Trio Voronezh has come a long way since playing Bach in a subway station in Frankfurt, Germany.

That's where the Russian trio was discovered back in 1993.

Today, the three graduates of the Academy of Music in Voronezh, Russia, make their home in Eugene, Ore., and play concerts throughout Europe and the United States.

Trio Voronezh will play at 7:30 p.m. Friday at the Lied Center. The program will include the works of Mozart, Vivaldi, Tchaikovsky and Schubert as well as Russian folk music and popular tunes. 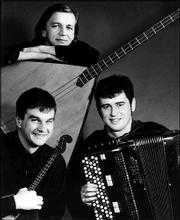 Volochin, born in 1966, plays the domra, a three-stringed, long-necked mandolin that is a predecessor to the balalaika. He started playing the domra when he was 6 and has performed as a soloist in ensembles and with the National Orchestra of Hungary. He is the 1998 Russian National Champion of the "All Russia Domra Competition."

Petruchin, born in 1974, plays the double-bass balalaika, the three-stringed Russian national instrument with a triangular body made of fir and known for its resonant sound. Petruchin took up the accordion at age 6 and the balalaika at 19.

Teleshev, born in 1971, plays the bajan, a chromatic-button accordion with various registers, which the musician changes using the chin. Teleshev has won many regional prizes in Russia for his talents on the bajan, which he has played since he was 6.

Trio Voronezh started its career by playing in small concert halls in Germany, France and the Netherlands. The three won second prize in the "Best Ensemble" category in the 1995 Klingental International Accordion Competition. The group made its U.S. debut in 1996 at the Oregon Bach Festival.