Though Sean Hunt -- better known by his stage moniker Approach -- is one of the most respected MCs in local hip-hop, there's one thing you'll never hear him do.

"You might catch a 'damn' or a 'hell' here and there, if you listen real close," he says during a recent interview just around the corner from his KC crib. "My mom wouldn't let me cuss in the house, so when I started rhyming I didn't write any cuss words, and I've never changed. Now, that's kinda like my statement. There's so many words! I haven't even gotten to the point where I've really used the words I wanna use yet.

"Some people have the thing with the harder lyrics, but I just want to make those records that you can play no matter where you're at. If you're rolling with cats and they just wanna bump and ride, they can play it, but if your mom's in the car, you don't have to turn it off. That's my whole goal."

That goal was achieved with the long-anticipated release of Approach's second effort, "Ultra-Proteus," where the 23-year-old MC collaborates with the cream of the area rap underground. Archetype's Nezbeat (Jeremy Nesbitt) helped produce the project, and guest appearances occur by numerous luminaries, including occasional Belles organist Ehren Starks and longtime partner-in-rhyme Mac Lethal.

Though it's practically impossible to mention Approach without Mac's name popping up, the two have decidedly distinct styles, a marriage of opposites that creates new dynamics when the pair trade rhymes.

"We usually do our shows together and affiliate ourselves with each other because we're boys," Approach says of Mac. "I'm a fan of his music and vice-versa. He's got a rare mind; he's one of those one-in-a-million people. But we're completely opposite -- from beat tastes, to opinions, to everything, it's a total dichotomy."

Approach was with Mac in Cincinnati when the later won Scribble Magazine's 2001 MC battle at Scribble Jam. The annual hip-hop gathering-of-tribes allowed them to rub elbows with rising underground stars as well as hang out with aspiring musicians from other parts of the country -- something that gave Approach a new appreciation of his own local scene.

"We're in Kansas; we're kind of in a bubble," he says. "(As rappers), we don't really know how good we are, except amongst each other. When we went to Scribble Jam, I realized how dope Kansas City and Lawrence's hip-hop really is. Because we went (there) and there's a lot of people that you buy their record and you listen to, and you get up close and you cipher with them and you're not that impressed."

Approach began rapping in 1995 in Skill Society, quickly hooking up with the core of musicians and MCs who would go on to form Seven Fold Symphony. On weekends, the collective would take over the stage at Gee Coffee for extended freestyle sessions that lasted into the wee hours. Alongside Seven Fold's Negro Sco and Brother of Moses, Approach transformed his freestyle skills into something akin to a deadly weapon, honing his phrasing, flow and verbal viscosity until gleaming. For Approach, freestyling remains the only avenue to becoming a true MC.

"When you freestyle, there's just an energy and a level and a way that you deliver when you're feeding off of people," he enthuses. "It's a good way to test your energy and how clever you are off the top of the mind; it's a good way to sharpen your mind and open up your head. Because you get to a point where no matter where you go, there's a million MCs that are gonna want to test you. I personally don't ever want to look like a fool. I'm not scared of losing battles, but if somebody wants to come with it, I want to be mentally prepared."

Several of Approach's better freestyles made it to "Web of Thought," his 1998 debut EP, produced by local knob-twirler Rebel. Though "Web" is considered a minor classic by area hip-hop heads, it only offers a hint of what the artist is capable of today.

"I had a lot to say, I just hadn't developed my style yet," he admits. "If me and Rebel were to get together today, it would be really different, because I'm kinda coming into my skin a little bit, getting used to hearing myself on record." 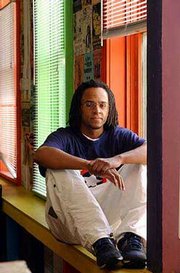 Approach is the perfect name for a guy like Hunt, whose enviably sunny disposition makes him one of the more, well, approachable rappers around.

On hand at nearly every area hip-hop show, he can always be found near the front of the stage, soaking in the street knowledge and words of wisdom pouring from the speakers. Always quick with a genuine smile and a warm welcome, he is one of the few MCs without detractors. Wherever Approach goes, he gets nothing but love, allowing him to gravitate with ease between the relatively closed circles of street-styled gangsta rap and more enlightened fare.

"Cats are just real nice to me," he grins, shaking his head. "I feel like I can rhyme and hold my own most definitely, but when it comes to songs, I feel like I got a long way to go. I'm a kind guy, and I don't want people to get the CD and then meet me and I'm such a letdown compared to the music.

"Because basically what I do (musically) is me. If a person meets me and they listen to the disc, they got a full understanding of who I am. I'm looking for positive energy. I try to put it out there. If half of what I put out there comes back to me, I'll be just fine."