By By Francis Kelly - Special to the Journal-World

Fort Lauderdale, Fla. — There was little doubt this was a blues cruise even before the ship left port.

After escaping the bleak and brittle Kansas winter for a cruise in the Caribbean, hanging out onboard in Fort Lauderdale while we waited for performers -- who were delayed by snow en route from Chicago -- was a pleasure.

While the latecomers filtered in, Lil' Ed and the Blues Imperials had the ship rockin'.

Ed Williams' animated antics put smiles on faces as the band played atop the boarded-over swimming pool at the ship's aft. (You should learn these nautical terms but I won't be too stern even if you can't fathom a bow. Knot!)

As an excuse for a getaway at this time of year, a Caribbean cruise was enticing enough. Add a festival's worth of premier blues acts performing on the same ship and it became irresistible.

Because 2003 was decreed Year of the Blues by the U.S. Congress (which often bestows the blues upon us), I felt a patriotic duty to attend the Legendary Rhythm & Blues Cruise.

So on Feb. 4, I flew to Fort Lauderdale and boarded the stately Melody for a four-night expedition. The price, not including airfare, was $975 per person, double occupancy, for a room with a locked porthole. The room was nice except for the boot camp bed. Those opting to go without the view, which I'll do next time, can save almost $40 a day.

After Lil' Ed and some dinner, there was time to relax before the acts resumed about 9 p.m. Late in the evening, the ship set sail. So did Rod Piazza and the Mighty Flyers. 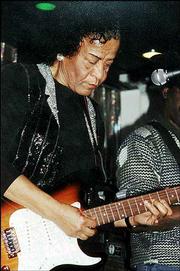 Bring on the blues

The Flyers have been named blues band of the year twice in the past five years by the W.C. Handy Awards, and with good reason. Rock, swing, boogie -- they did it all with class. Piazza's harmonica hit you deep in your soul, and Miss Honey played a rapid-fire stride piano that, if you closed your eyes, could be straight out of the 1930s. But few guys closed their eyes when Miss Honey was on stage.

I was standing by the ship's rear rail, six stories high under a blanket of stars, with just the whipping wake below as the vessel cut through the dark deep. As the band blasted blues to the void, it was a singularly surrealistic sensation.

Meanwhile inside the comfy club, Lonnie Brooks was showcasing his Louisiana swamp blues, ambling out among the seats to the crowd's delight. Although nearly 70, Brooks still played with energized zip and zeal, instilling the same feeling in the hearts of his listeners.

Back outside on deck, a mini-hurricane was roiling. Fortunately it was just Lawrence's own Kelley Hunt Band. The veteran Hunt's vocals were gospel-tinged but her sermon was a siren song, and her powerful piano nearly knocked the dancers off the deck.

How hot was Hunt's set? One passenger from Virginia named Martita said, "I never heard of Kelley Hunt before, and I thought I was going to self-immolate from her music." 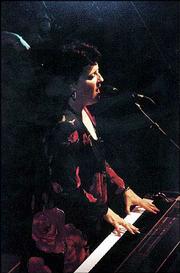 Pyrotechnics aren't necessary for performers with fire in their souls.

Next up in the club was the guitar wizardry of Bernard Allison, following in the footsteps of his late father, Luther. I actually found Bernard's mellower vocals and sweet string-bending more appealing than his dad's edgy style. The crowd really came alive when Allison did his psychedelic tribute to Jimi Hendrix.

The term "jam" has strayed far from its original meaning, but the late-night jams on the cruise were in the real tradition of accomplished players letting loose the creative flow and inspiring each other to stretch their limits. "Special guests" had been promised, and this was no deception when out came two former members of Muddy Waters' band.

At almost 90, Pinetop Perkins was still caressing and cavorting on keyboard. Joining him was Bob Margolin, a superb six-stringer and fave among fellow musicians for his ability to share the spotlight.

Even with such talent at their disposal, one can only party so long. I crashed until we docked at the city of Freeport in the Bahamas. Because it was a cloudy, rainy day, I skipped the island tour and swam in the pool to relieve my sore legs from dancing and sore back from the hard bed. 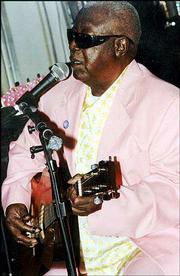 Many passengers also were baby boomers, with less leather and fewer tattoos than I expected. Even the smoke wasn't overwhelming for the most part, except when I sat one evening and spoke with Taj Mahal as he nursed a humongous stogie. I nearly needed a lung transplant, but the multi-instrumentalist (who calls the Blues Cruise "one of the best musical experiences you can have on the planet") proved a fascinating font of social commentary.

He said, "The thing that is needed to harmonize and heal this country is clearing up the rifts between indigenous and transported peoples."

If this journey's account is starting to run amok, well, so did the trip. Between the all-night jams, the wee-hour food banquets and the odd-hour naps, it was hard to keep track of what happened when. But that in itself was entertaining.

When we stopped at Key West, I checked out the sights. Despite the tourist trap aspect, the island was a lush and sparkling green on that perfect day. I swam at the public beach named for one of my "favorite" presidents, Zachary Taylor (who?) and enjoyed finding shells and gawking at the most charcoaled white guy I've ever seen.

Francis Kelly/Special to the Journal-World

Taj Mahal plays bass during a jam session aboard the Melody.

Back on board was another surprise of the trip: some older, relatively unknown blues artists who possessed all the talent of the big names but hadn't received exposure. (Of course, lack of exposure is a chronic problem for blues, but that's more an issue of greed by the music Neanderthals in commercial radio and the record companies. The multimillion sales of the "O Brother, Where Art Thou?" soundtrack surprised the music business, which thought genuine mountain music was dead. Exposure to blues could easily simulate that success.)

Among the gems: Blues guitarist and singer Cootie Stark was led to the stage, where he wailed a "tale so true." Blind but dressed to thrill in a shiny suit of pink, Stark poured his heart out through his lonely vocals, accompanied by the booming thumps of a stand-up bass courtesy of Taj Mahal. Their low-key tones bypassed all that body-rockin' we'd been doing and drove the tunes on a mainline train to the brain.

Guitarist Beverly Watkins took the stage and proceeded to rip some down-home riffs like Freddy King. The 63-year-old grandma rocked the joint and sang with a passion for love and life.

Watkins said, "I'm just using the gift God gave me. It's a relief not having to clean offices anymore after more than 30 years at it."

Stark and Watkins are just two of the forgotten artists that the cruise brought to the attention of blues fans. That has been accomplished by the Musicmaker Foundation (www.musicmaker.org) which has garnered praise and support from stars like B.B. King and Bonnie Raitt. Musicmaker sold CDs and other merchandise on the ship to raise relief funds for musicians who are suffering in poverty.

Having the blues, whether from poverty or a broken heart, is a common condition. But blues music is not about wallowing in the pain, it's about reaching deep inside and rising above it. Being on a ship full of blues lovers showed me that the music puts a bounce in your body and a song in your heart.

Upon disembarking I knew that the blues -- ironically enough -- had rejuvenated my joy.