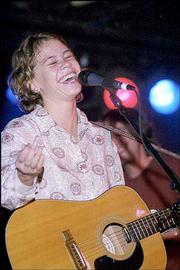 And I know your face like I know my own

Lyrics from Celia's song "Curly Hair" seem a fitting sentiment for her latest engagement. The singer-songwriter is making a return to Lawrence in order to host Girls Rock, the second annual fund-raiser for Achievement Place for Girls.

"It's a song that I wrote about friendships between women and how we encourage each other," Celia says of the tune.

That encouragement seems especially appropriate when pertaining to Achievement Place for Girls, a group that helps adjudicated youth (those in the juvenile court system) reacclimate to society. Eight of these girls, ranging in age from 13 to 18, share a house together at 637 Tenn. The setup teaches them personal responsibility by providing structured, family-style living where they learn to follow house rules, tackle chores, concentrate on their schooling and work in the community.

"We first did this about a year and a half ago at Milton's (920 Mass.) and had a wonderful time," Celia says. "A lot of people came out. Spirits were really high. I don't think many that came had heard of the Achievement Place for Girls before ... including me. Over the course of the evening a lot of people got on board and got behind what seems to be a really great program."

"We don't have much of a fund-raising base," says Achievement Place board member Sally Howard, who hopes to net $5,000 from the event. "We really haven't worked at it. This agency is still kind of struggling on that end."

Achievement Place is supported financially through multiple placement agencies -- juvenile justice authority is an example -- that pay a per diem to house the girls there. The organization is in its 32nd year of operation.

"She played everything from original stuff to Broadway show tunes," remembers Howard. "And she was such a wonderful host."

Celia mentions, "That's one thing I typically do around here is host events. I'm kind of a spokesmodel ... that's a joke."

Joined by a fellow guitarist, bassist and keyboardist, a group she assembled especially for this performance, the jovial singer plans again on delivering an eclectic blend of material.


"We'll be playing a mixture of some jazz standards, show tunes -- like 'On a Clear Day (You Can See Forever)' -- and a couple of original songs that we handpicked for the show," she says. "Since it's for the Achievement Place for Girls, some of the songs are thematically about girls; they're encouraging songs."

Raised in Oakley (in the western part of the state), Celia came to Lawrence to attend Kansas University, where she graduated with an English degree. After exploring the city's music scene for six years as a solo artist and as a member of the female songwriter collective Sirens, she relocated in January of 2001 to St. Louis.

"I moved because I was getting jobs here (in St. Louis)," she says. "It's just a bigger market with about the same cost of living."

So far her live engagements have been booked at a steady clip, although her studio output is at something of a standstill.

"I don't have any new CDs, but I have a really killer-looking T-shirt," she says, laughing.

A live auction and raffle will feature additional items for sale at Saturday's concert. Various local businesses have donated spoils ranging from jewelry to artwork to furniture. Many area restaurants have kicked in gift certificates.

As for naming the event Girls Rock for a show absent of thundering drums or blaring distortion, Celia believes the phrase has multiple meanings.

"My Web site is www.celiaisrock.com. I chose that specifically, not because I rock or my music necessarily rocks, but I feel STRONG and that's a good way to feel. So having Girls Rock as a title for Achievement Place is just right."

Or as Howard puts it: "Do girls rock? How DON'T we rock?"